Many have been caught flat-footed by the sudden move into Treasurys because it has been driven by a rush to safety amid the ballooning euro-zone debt crisis, a stampede that was difficult to predict a few months ago. As buyers piled in, prices rose and yields—which move inversely to prices—fell.

Treasury yields are now trading near their lowest levels in a year, the bottom of a trading channel that has persisted for about 12 months.

That has upended the widespread view at the beginning of the year that Treasurys would seem less attractive amid a recovery in company profits, a rebounding U.S. economy and an avalanche of Treasury debt issuance. Less than two months ago, the 10-year yield was flirting with 4%.

"A lot of people didn't see the latest rally coming," said Zach Pandl, economist at Nomura Securities International. Nomura in mid-April was one of the first of several so-called primary dealers—banks authorized to deal directly with the Federal Reserve—to cut its year-end forecast for the 10-year Treasury yield, to 3.75% from 4%.

Since late March, most primary dealers have cut their year-end predictions for 10-year note yields, according to a survey by The Wall Street Journal, driving the median forecast to about 3.75% from 4.15% at the end of March.

"What we did not anticipate was that 10-year notes and 30-year bonds would become the global safe haven during the European crisis," said Jefferies chief economist Ward McCarthy, who said he believes yields will soon resume their rise.

Count me in the crowd that didn't see this coming.

Both the dollar and Treasuries have caught a very strong safety bid from all comers over the last few months. What is interesting is this runs counter to the politically driven narrative that the US is the next Greece. If that were true, we wouldn't be seeing the same safety bids we're seeing now.

However, let's take a look at the long-term chart to see how strong this rally really is: 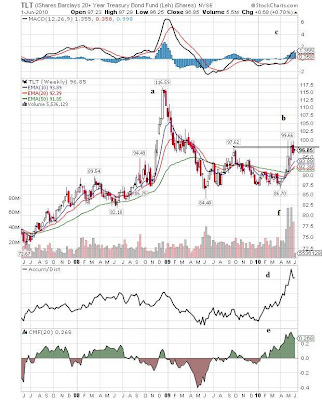 At point (a) we see the Lehman rally -- that rally that occurred during the financial collapse. Unless we see similar financial conditions develop, it's doubtful we'll see this type of rally again. The latest rally is currently hitting resistance at previously established highs (b). Momentum is positive (c) and we are seeing a large inflow of cash (d and e) into the market. Notice the A/D line is higher now than it was during the Lehman crisis. Also notice the huge volume spike (f) as well.