Last week the Rockefeller Institute issued its report on state finances [pdf] for the 4th quarter of 2009. Since it covers finances from 4 to 6 months ago, this is very lagging data. What is noteworthy is that the trend strongly suggests that on an annual basis state finances hit bottom at some point in the 1st quarter of this year, probably January or February, and are positive YoY now.

This by no means indicates that the states are out of the woods, or that more painful cutbacks aren't in store this year. In fact, if anything it makes the case for another big round of federal loans to the states to bridge the gap in their finances until they recover further.. Nevertheless, it appears the bottom has been reached. Here is the bullet-point summary of the Rockefeller Institute's report:

Total state tax revenues in the fourth quarter of 2009 declined by 4.2 percent relative to a year ago. The income tax was down by 4.6 percent, the sales tax was down by 5.3 percent, and the corporate income tax declined by 3.6 percent [vs. a year previously].
....
Preliminary figures for January and Februrary for 45 early-reporting states show continued weakness, with personal income collections dropping 7.1 percent and overall tax collections dropping 2.2 percent from a year earlier.
....
Preliminary figures for the 41 of 45 early reporting states with broad-based sales tax indicate that sales tax collections saw some trivial yet positive growth at 0.1 percent in January-February 2010 compared to the same period of 2009, but nonetheless the sales tax in the median state for these two months was down 4.2 percent. While March data could change the picture, the sales tax could see small positive growth in the January-March quarter as a result of stabilizing retail sales and consumption as well as legislated changes in several states

Note that these are all year-over-year calculations. The Rockefeller Institute explains that while

Looking at revenues on an annualized basis also makes sense because states are interested in how revenues compare with their annual budgets.
Although it was to be expected that on a year-over-year basis, state tax revenues would be worse in 2009 than 2008, given the freefall in the economy at the end of 2008 which bottomed in 2009, more important for our purposes is what the trend in tax collections portends for 2010. Here, the story is decidedly mixed, but late-breaking information suggests the turnaround probably occurred in March.
First of all, here is a chart from the Rockefeller Institute report, showing the trend in income, sales, and personal, corporate and sales taxes collections for the last 5 years 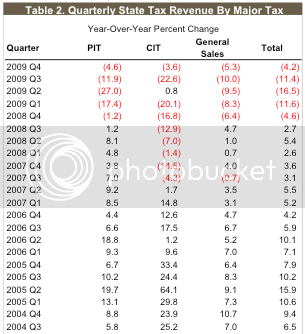 When the Rockefeller Institute was preparing their report, they were pessimistic on this score:

[P]reliminary data on tax collections in January and February in 45 states show that year-over-year increases are few and far between. Tax revenue is continuing to decline in the median state, and at this point it appears as if the January-March quarter will have declines in the median state. … athough there is evidence of further slowing in the rate of decline. With preliminary data for January and February now available for 45 states, tax revenue for the two months combined has declined further by 2.2 percent versus the same period last year. About 84 percent of states reporting personal income tax data had a year-over-year decline, with a median decline of 7.1 percent, while 80 percent of states reporting sales-tax data had a year-over-year decline.

As indicated above, the late breaking news is March. The Rockefeller Institute report itself noted that "March data could change this troubling picture" and there is reason to believe it indeed has. According to the March 30 edition of Business Week:

The two-year slide in tax collections that opened a $196 billion gap in U.S. state budgets has stopped, easing pressure on credit ratings and giving leeway to lawmakers as they craft spending plans for next year. The 15 largest states by population forecast a 3.9 percent gain in tax revenue in fiscal 2011, budget documents show. The 50 states on average may increase collections by about 3.5 percent, the first time in two years the figure is expected to grow, said Mark Zandi, chief economist at Moody’s Economy.com. California took in 3.9 percent more since December than projected in January, Controller John Chiang said this month. New York got $129 million above forecasts in its budget year through February, according to a report from Comptroller Thomas DiNapoli. In New Jersey, the second-wealthiest state per capita, January sales-tax collections were 1.9 percent higher than a year earlier, the first annual increase in 19 months, forecasters said in a report last month.

In addition to California, New York, and New Jersey, I have been following about half a dozen other states to see when their sales tax revenues would increase YoY, ending any doubts about the upward turn in retail sales. Here are the results as of their latest reports:
- Ohio March sales tax receipts were up +2.4% YoY
- Pennsylvania sales tax receipts were up +8.5% YoY in March
- Alabama sales tax collection up +3.1% YoY in March
- Florida, which had been doing horribly, had sales tax revenues down only -0.6% YoY in March (compared to -4.3% in January, -4.9% in December and -8.1% in November)
- Tennessee, which had also been doing poorly, showed total tax revenues down only -0.4% in February, (compared with -1.8% in January, -2.9% in December, and -4.5% in November)
- Indiana, although still down -3.1% in March, was also an improvement from prior months (-4.3% in December, -6.1% in November)
- Texas, the only large state still doing poorly, reported sales taxes still down -7.8% in March, but overall revenues were up YoY. The sales tax decline was still a vast improvement over prior months' reporting, such as the -14.2% YoY decline in January.

As a side note, I am tracking these states in particular in response to the King of All Doomish Bloggers, Mish, who cited these states as proof that state sales tax receipts have not mirrored retail sales data, which turned YoY positive in October 2009. On this score, the Rockefeller Institute provides the perfect rejoinder:

while real retail sales have been rising from their lows for about the last year, they are still more than six percent below their prerecession peak. So even if sales taxes mirrored retail sales, they would be well below their recession peak. In fact, though, many state sales taxes exempt food and other necessities, and exempt or exclude many services, relying more heavily on non-necessities. Many of these taxable goods and services — such as cars, other durable goods and restaurant meals — are far easier to do without or postpone than are necessities and they tend to be more volatile and suffer greater declines in business downturns.

All of this is confirmed by what is happening with taxes paid to the Federal government. The Treasury Department publishes a daily report of its income and payouts. Even as the economy as a whole began to recover late last year, tax receipts were still down on a YoY basis (this is why raw YoY reports are problematic, unless you know the trend in the YoY numbers. A series inevitably will turn up from a bottom, but still be negative YoY for a number of months. Here is the Rockefeller Institute's headline chart entry as to personal tax withholding for the year 2009:

Given this trend, you would expect the comparison to turn positive in the first quarter of 2010, and according to the US Treasury Department, it did. Total receipts for February withholding tax receipts were only down -2.3% YoY, compared with January's -6.7% YoY shortfall. By the end of March, however, YoY tax receipts were UP 5% for the month. That improvement has continued this month. As of the latest report, April 2010 withholding tax collections were ahead of April 2009's collections by 6.5%. The below graph, which I have posted here before, is about 3 weeks old, but the trend is clear and speaks for itself: 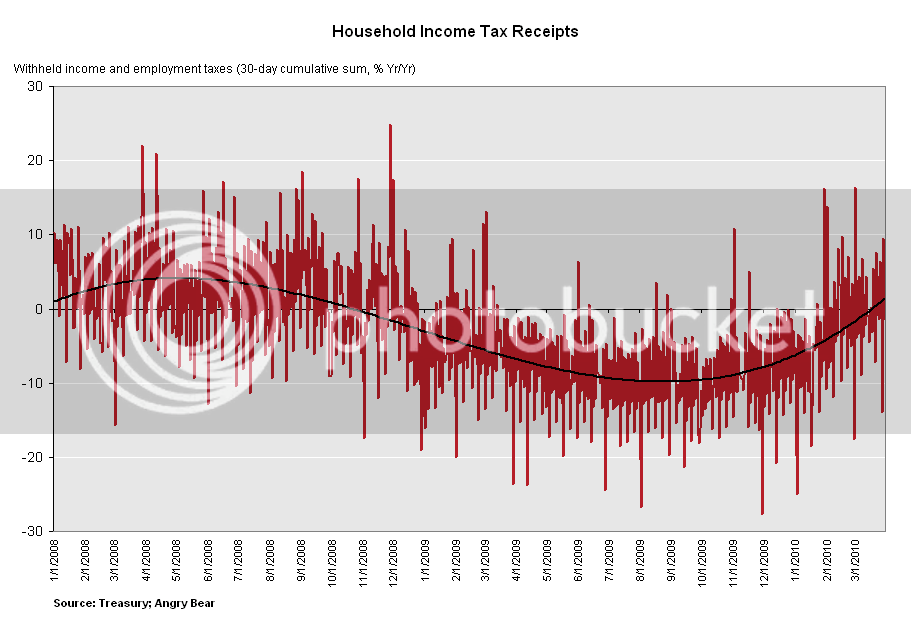 So, are happy days here again? Of course not. Having most likely reached the bottom of the cliff, the states are on an absolute basis at the worst levels in decades, as reflected in the draconian cuts many states are making in their budgets. Undoubtedly some will have to continue to lop off many important services to bring their budgets into balance at this low level. The Rockefeller Institute believes that the average state has suffered a crushing loss of 18% in tax revenues from peak before the Recession, even if revenues are beginning to stabilize in early 2010: 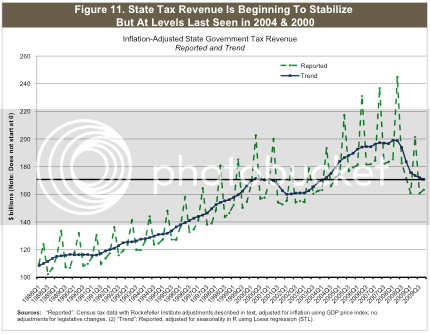 What this post shows is that the fiscal situation is unlikely to get much worse. and should get better from here. The Rockefeller Institute report itself notes that it will probably take a number of years for states to repair the damage. The Business Week article noted that, although tax revenues are up compared with 2009,

In the meantime, a continued Federal line of life support is necessary. Allowing fiscal assistance to the states to expire would be the worst kind of Hooverism (and actually, that's a slander on Herbert Hoover). The Federal government should extend low-interest grants to the states which do not have to be repaid until state budgets firmly reflect economic expansion.
Posted by New Deal democrat at 9:30:00 AM