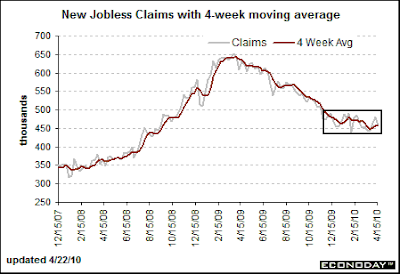 Initial jobless claims fell back to trend in the April 17 week, coming in at a largely as-expected 456,000 and reversing two weeks of administrative delays that swelled claims to as high as 480,000 in the prior week (revised from 484,000). The 456,000 level compares with 445,000 in the March 20 period, offering a flat comparison at best to gauge monthly payroll change. Despite the distortions of the prior two weeks, the four-week average shows a similar comparison: at 460,250 vs. 454,000 at mid-March. Continuing claims for the April 10 week fell 40,000 to 4.646 million with the four-week average down slightly to 4.644 million.