Demand for new homes in December fell, as cold weather and continuing joblessness put a chill on hopes for a housing-market recovery.

Single-family home sales fell 7.6% from November to a seasonally adjusted annual rate of 342,000, the Commerce Department said Wednesday, though it noted the drop was within the margin of error. December's reported drop followed a 9.3% plunge in November. Meanwhile, on a positive note, home inventories fell last year, compared with 2008, but prices fell, too.

"The new-home market continued to wilt late in 2009," Mike Larson, an analyst at Weiss Research Inc., wrote clients. "The buyers who are willing and able to buy are flocking to cheaper, distressed, 'used' homes."

New-home sales suffered because of strong demand for used homes and the looming expiration of a big tax credit. Fears that the $8,000 government incentive for first-time buyers would run out Nov. 30 pushed purchases into earlier months. Congress in early November extended the relief through April.

Let's go to the data: 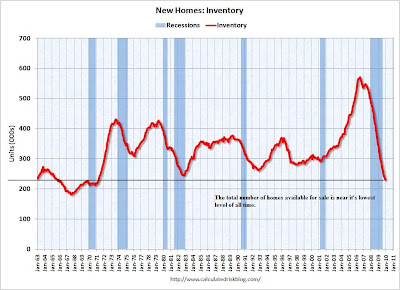 Thanks to Calculated Risk for the graph.

New home inventory is very low by historical norms. That means excess inventory of new homes has been cleared out -- an economically healthy development.
Posted by Unknown at 11:30:00 AM