Yesterday I wrote about the extremely close fit between % changes in GDP and % changes in jobs on a year-over-year basis. Generally speaking, take the YoY %age change in GDP, subtract 2, and you are probably within a percent or two of the YoY % change in jobs, with a lag of a few months.

But the YoY change doesn't tell us about when we begin to add jobs coming out of a recession. For that we need to compare changes in GDP with monthly gains or losses in payrolls, which is what I've done below.

First, let's look at a graph of the 1992 "jobless recovery." YoY GDP is in blue (right scale, note I am not subtracting 2 in this graph), monthly gains/losses to payrolls is in red (scale to the left, in 1,000s): 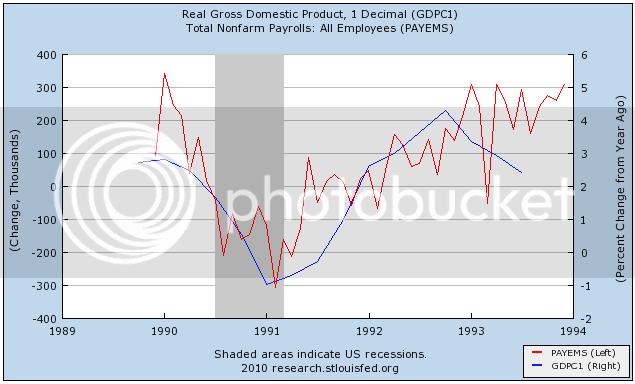 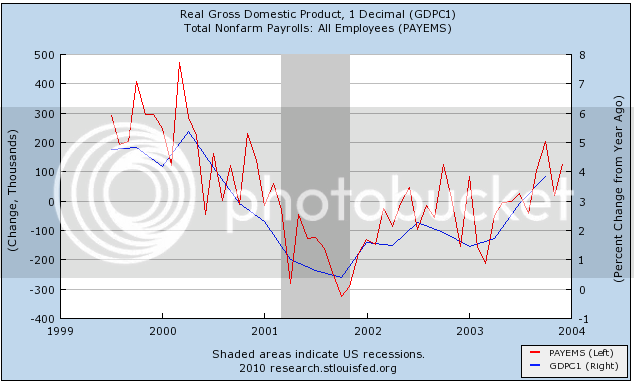 The offshoring of manufacturing was in full swing by this time, and only 3 months of 2002 showed job gains (June, October and November) while GDP was positive over 1% throughout, reaching a YoY gain of just under 2.3% in 2Q 2002. Once YoY GDP hit 2% consistently beginning in 2Q 2003, jobs finally were added to the economy on a consistent basis.

Finally, here is the "Great Recession": 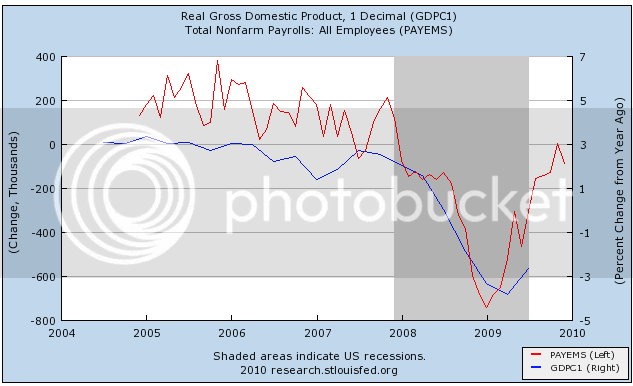 We learned this morning that 4Q 2009 GDP was 5.7%, giving us a YoY GDP of 0.8%. The Leading Economic Indicators virtually guarantee another good GDP number for Q1 2010, making it very likely that we will have YoY GDP in excess of 2% this quarter.

Strictly going by the GDP, if the economic expansion is more like 1992, we are going to start adding jobs consistently now. (Based on increases in industrial production, retail sales, and declining layoffs, I think this is more likely). If the expansion is more like 2002, we are going to add jobs sporadically in some months and not in others. What everyone is watching is sustainability. If gas prices go up too much, or as the effect of last year's stimulus plan begins to wane, can gains be sustained? And noboby is talking about declining unemployment yet. On that, the jury is very much out.
Posted by New Deal democrat at 8:30:00 AM