One of a Million Possible Outcomes

In a recent correspondence with a friend at the St. Louis Fed, we briefly discussed what the jobs trajectory growth rate might look like as we (hopefully) turn the corner. Suprisingly (at least to me), my friend commented that he'd been modeling "numbers from 1.8 to 2.7, but I've seen other forecasts with growth rates over 3 percent by the end of 2011." Personally, I think that's a bit optimistic, but let's go with it for the purposes of this post.

What I've produced below is a chart that represents:

Vertical lines represent the point in time that employment reached its previous peak, the longest recovery currently being the 2001 recession.

While we of course know that nothing goes from Point A to Point B in a nice, neat, linear fashion, it is interesting to see how things might play out. Using the comment from my St. Louis Fed friend, my forecast incorporates the following: Starts at 2 percent growth immediately and increases by 0.5 percent every six months (2.0, 2.5, 3.0, 3.5) until the previous high is reached. (Click through for giant chart.) 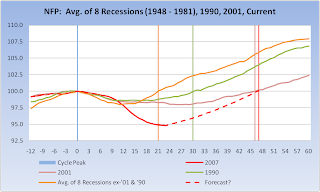 If we could get started straight away -- and Friday's number provided some hope that we can -- and get some jobs momentum going as detailed above, it's possible we could recover to our previous high just one month later (47 months) than in the 2001 recession (46 months). I think the odds of this outcome are very long, but not impossible. It is fairly clear to me that this will be the longest jobs recovery on record, and this chart from Calculated Risk tells much the same story: 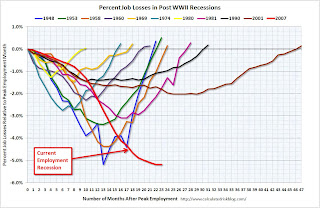 What we need is a catalyst. My vote -- since I don't believe the consumer is going to lead us out of this -- would go to stimulating business in the alternative energy space, which I would like to see be the next "big thing."

Absent a catalyst, I don't think this forecast has a snowball's chance. Consider that there was no real catalyst after the 2001 recession but for the Bush tax cuts, perhaps one reason that recovery now defines "jobless recoveries" -- there was no big thing. But it will be interesting to check in on this post from time to time to see how it's playing out (and I will obviously be tracking the monthly numbers).

How does anyone else see it? How would you handicap the employment glide path going forward?

(Just noticed -- after completing this post -- that Floyd Norris sees things differently). And I also see that Tim Iacono has weighed in on this issue over at The Big Picture. Lastly, I see Calculated Risk has a very interesting post as well.)