The Fed's Flow of Funds report was released yesterday and, as usual, it contained a treasure trove of (somewhat stale) data that's nevertheless fascinating. Herewith some observations:

Household net worth rose by about $2.7 trillion in Q3. It now stands at about $53.4 trillion, the highest level in a year (click through for giant charts): 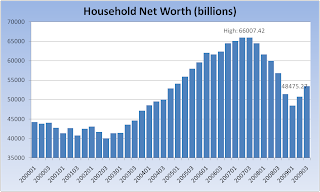 Our debt-to-income ratio, unfortunately, is still too elevated at 128%, and is only coming down very slowly. Continued improvement needs to be seen here. 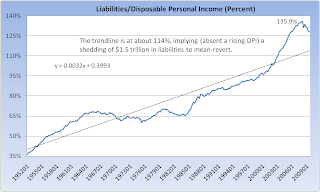 Owners' Equity as a Percent of Household Real Estate was revised (downward) to a first quarter trough of a staggering, almost unthinkable, 33.5%. It has rebounded in the subsequent two quarters to a merely hideously pathetic 38%. 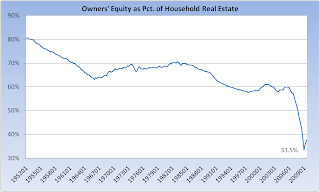 The chart above ties in beautifully with an article that coincidentally appeared in the WSJ (sub req'd) the same day the Flow of Funds report was released:

PALMDALE, Calif. -- Schoolteacher Shana Richey misses the playroom she decorated with Glamour Girl decals for her daughters. Fireman Jay Fernandez misses the custom putting green he installed in his backyard.

But ever since they quit paying their mortgages and walked away from their homes, they've discovered that giving up on the American dream has its benefits.

Both now live on the 3100 block of Club Rancho Drive in Palmdale, where a terrible housing market lets them rent luxurious homes -- one with a pool for the kids, the other with a golf-course view -- for a fraction of their former monthly payments.

The housing bust has brought big changes to the 3100 block of Club Rancho Drive in Palmdale, Calif. See details on the homes, debts and residents.

"It's just a better life. It really is," says Ms. Richey. Before defaulting on her mortgage, she owed about $230,000 more than the home was worth.

People's increasing willingness to abandon their own piece of America illustrates a paradoxical change wrought by the housing bust: Even as it tarnishes the near-sacred image of home ownership, it might be clearing the way for an economic recovery.

Thanks to a rare confluence of factors -- mortgages that far exceed home values and bargain-basement rents -- a growing number of families are concluding that the new American dream home is a rental.

Some are leaving behind their homes and mortgages right away, while others are simply halting payments until the bank kicks them out. That's freeing up cash to use in other ways.

As a societal matter, is the appeal of homeownership -- notwithstanding the various (mostly tax) advantages of owning (e.g. having a mortgage with an interest deduction) over renting -- going the way of the dodo bird? Could one not infer as much from the steady decline in owners' equity over the past many decades, as this metric has moved steadily downward from over 80% to under 40%? Are we destined to become a nation of renters, particularly in light of the pain that's been inflicted by the bursting of the housing bubble? What are the longer-term implications if such a shift is, in fact, taking place? (Our demographics -- an aging boomer population -- are going to further slow the housing market's recovery, but that's another post.)
Posted by Invictus at 7:45:00 AM