The unemployment rate rose from 9.8 to 10.2 percent in October, and nonfarm payroll employment continued to decline (-190,000), the U.S. Bureau of Labor Statistics reported today. The largest job losses over the month were in construction, manufacturing, and retail trade.

Here is a chart of the unemployment rate: 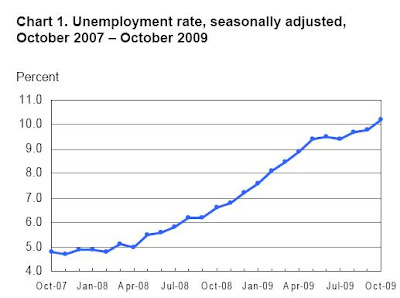 On the establishment side we have a loss of 190,000. But there is some good news in the details.

The service producing sector only lost 61,000 jobs. And in addition to the usual gains in education and health care we also saw an increase in professional services of 18,000 While it's small, it's something. Goods producing industries continued to shed jobs -- construction lost 62,000 and manufacturing lost 61,000.

Here is a chart of establishment job losses. 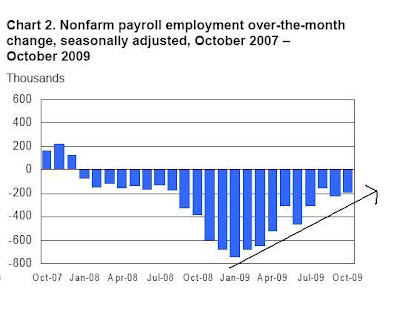 Remember that last month the BLS added an additional ~800,000 job losses to the the total losses in the last recession. That means we have an even deeper hole to climb out of. So the continued decrease in the rate of establishment job destruction means the economy is still progressing.

As I mentioned earlier, there is something for everyone in this report. Personally -- and especially after last month's establishment job loss figures -- this report tells us we're back on track. At the rate we're going we should start seeing establishment job gains within the next ~6 months.

Last months drop -- which was very disappointing -- is wiped from the record books.
Posted by Unknown at 7:50:00 AM