Some Off-Beat Observations on the State of Things

Herewith just a smattering of items I believe support my case that the third quarter – which may come in at 3% or better – may be a one-hit wonder. I offer these ditties as a counterpoint to recent posts by Bonddad and NDD, both of whom, it should go without saying, I respect and admire. As to the state of the economy and the recovery, it would appear we’ve agreed to disagree, which should at least make for very interesting reading. (I can’t speak for Bonddad or NDD, but it is exceedingly hard for me to find the time to sit down and work on a project like putting together a top-flight post. It is – and always has been – catch as catch can for me.)
Let’s first establish that I know full well that the labor market is a lagging indicator. Having said that, let’s look at some off-the-radar labor metrics that don’t garner a lot of attention.
The Bureau of Labor Statistics (BLS) puts out several reports. One of them – the Job Openings and Labor Turnover Survey (JOLTS) – doesn’t get wide play. In that report, BLS reports on the number of job openings (among other things). If we combine that report with some information from the Current Population Survey (CPS) – specifically the number of unemployed Americans – we can see the following:

Unfortunately, the JOLTS series only goes back ten years, but the picture this paints of slack in the labor market is not a pretty one, with fully six Americans vying for every job opening.
Staying with the JOLTS, let’s have a quick look at the year-over-year (YoY) percent change in job openings:

Some final thoughts on the labor market from economist David Rosenberg:
Yes, initial jobless claims did come down 26k (from yet another upwardly revised figure — the 23rd in a row) to 550k in the September 5th week. But claims are basically range-bound and at 550k are clearly still consistent with net job loss — they need to break below 500k to stop the bleeding in the U.S. labour market altogether and below 400k to start the process of reversing the uptrend in the unemployment rate. At this stage of the 2002 decline in claims from the peak, they were hovering just above 400k, not 550k, and that turned out to be a huge jobless recovery. This will make a mockery out of that one and the prospect that we see the spread between the U6 and the official unemployment rate measures mean revert will imply an unhappy meeting in the middle at around 12%. Just in time for the mid-term elections; tell us that we will not see a U.S. dollar depreciation as the next rabbit out of the hat (a la FDR circa October 1933).
The total level of claimants, including those on extended benefits, soared 158k in the August 22nd week to a fresh all-time high of 9.8 million. Before the onset of the recession in late 2007, that number was hovering around 2.5 million.
Moving on, we learned this week from the Census Bureau that real median household income fell in 2008 to levels we haven’t seen in over a decade:

Of course, that didn’t stop the U.S. consumer, who continued to binge on credit, but I pointed out the other day that the jig is clearly up with regard to borrowed money.
Now, the National Federation of Independent Business (NFIB, “The Voice of Small Business”) takes lots of surveys and polls its members about a host of issues. They publish their results monthly in their Small Business Economic Trends. Let’s have a look at a couple of this month’s entries. It would appear that perhaps a better name for this first item might be the Small Business Pessimism Index Components. 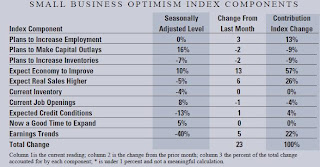 What is the predominant problem that small businesses are facing? Let’s have a look, shall we? 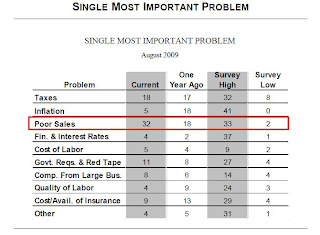 As I mentioned recently, we have been an economy bolstered by government steroids for the past several months. I'm not taking issue with that -- it was clearly the right thing to do -- just stating the fact that we really don't have much clarity as to what the economy would look like absent the government largesse we've seen over the past six months or so. Given what I see in the labor market, the fact that earnings (talking publicly traded companies here) have come almost exclusively from cost-cutting (and virtually no top-line revenue growth), and the fact that small businesses are still hurting badly, I just don't see much more than scraping along the bottom, with a distinct risk of double-dip.
Posted by Invictus at 6:16:00 PM