When Will the Economy start to add Jobs? (I.)

Now that most economists believe that the economy has ended the recession and entered recovery (defined by GDP terms), the question remains, "when will the economy start to add jobs?" This point was aptly made by Paul Krugman, who last week said on his blog, "the fact that the economy may be technically in recovery is irrelevant" to the vast majority of Americans, for whom the most important metrics by far are jobs and wages.

So, I plan on exploring that question in depth in a few blog posts, because there are a number of data series that do have a history of leading job growth.

Let's start with initial jobless claims. These are the claims for unemployment benefits by people who have just been laid off. Even in boom times, there might be 325,000 such claims every week. At the height of this recession, in March and April, on average 659,000 claims were being made per week. Recently that number has stabilized in the 550,000-570,000 range, as shown on this graph:

Last week, "only" 550,000 new claims were made -- which was the least number of claims since early January (leaving aside a couple of weeks in mid-July, which may have been affected by an unusual pattern of auto plant closures).

Initial jobless claims are one of the 10 Leading Economic Indicators. Thus they can be expected to lead job growth/loss and also to lead the unemployment rate. A few other bloggers have tried to calculate how much of a fall in initial claims might be needed to generate actual job gains. Berkeley Prof. Brad DeLong believes they must fall under 400,000 per week, basing his opinion on both rising and falling claims for the last two, "jobless" recoveries. Now, much as I esteem the good Professor, in this case the data contradicts him. For example, in both the deep 1974 and 1982 recessions, the economy started to add jobs when jobless claims fell past the 500,000 mark.

And here's the graph, showing the percentage drops from each peak in jobless claims until a point 3 months after unemployment peaked, for the 1982,1991, and 2001 recessions as well as the present: 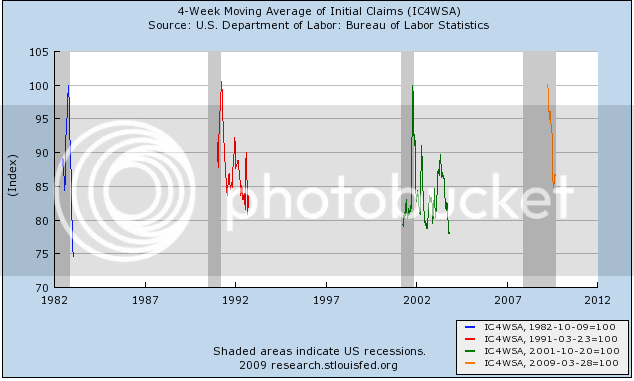 Based on that work, I believe that the economy will start to add jobs when the initial jobless claims rate drops past 550,000, and stays significantly under that number (about 530,000 or less) for three months, or else quickly drops under 500,000.

But of course, that begs the next question, which is, how can we tell if jobless claims are moving in that direction or not? There are several other data sets that help pinpoint this, and that's what I'll explore next week.
Posted by New Deal democrat at 11:00:00 AM