This morning the BLS reported that consumer inflation rose +0.4%(seasonally adjusted) in August, up +0.2% NSA. While year-over-year prices are still - 1.5% into deflation, this is an increase from last month's bottom of -2.1%.

The deflationary bust of early 2009 unfolded in accord with the optimistic scenario I laid out in January:

In the pre-World War 2 era of deflationary busts, including the Great Depression, PPI for commodities bottomed and turned around either before or simultaneously with CPI. when YoY CPI bottomed, the bust ended. Such a bottom coincided with increased demand. Here is the consumer and commodity inflation data during the deflationary 1920-1950 era demonstrating this point: 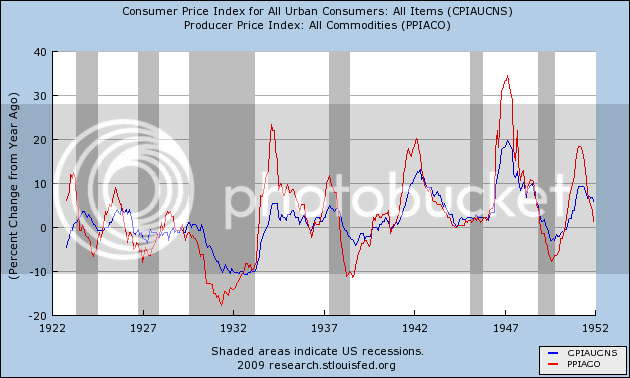 Note that commodities (in red) almost always turned up before the economy as a whole did. Typically CPI (in blue) bottomed on a year-over-year basis at the end of deflationary recessions, including the Great Depression.

Food inflation has also turned around:

The food index rose 0.1 percent
following a 0.3 percent decline in July. The food at home index,
which fell 0.5 percent in July, was unchanged in August.

It is noteworthy that 2 of the 5 coincident indicators known to be used by members of the NBER to date the end of recessions -- real retail sales and industrial production -- have increased, and 2 others -- personal income and aggregate hours work -- appear to have bottomed, consistent with the pre-WW2 deflationary bust scenario outlined above. Only jobs have yet to turn around.
Posted by New Deal democrat at 7:55:00 AM