Another forecasting model for Job creation

Prof. James Hamilton of Econbrowser has put up a guest post by Michael Dueker, who is using an econometric business cycle model based on research published by Prof. Hamilton. The model's last prediction of the length and job losses during the Recession, in December 2008, "Current business cycle forecasts see a July or August 2009 trough and a jobless recovery until March 2010", proved uncannily accurate in forecasting the end date of the Recession, and included this graph of projected payroll losses in 2009 and beyond: 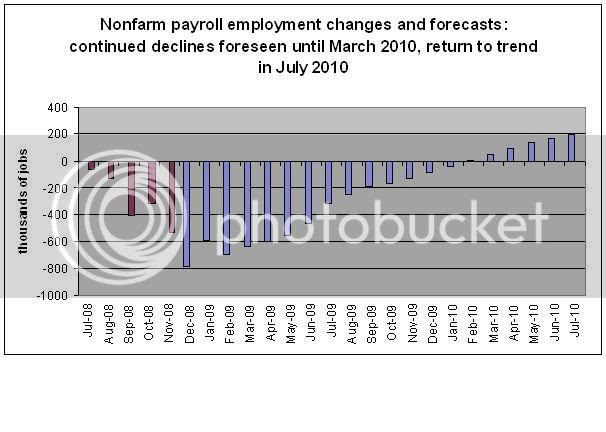 The only difference between that graph and what really happened was that February was worse than forecast, and May and June got reversed. The forecast even closely mimicked the actual 216,000 losses in August! Here's Bonddad's graph of what actually happened: 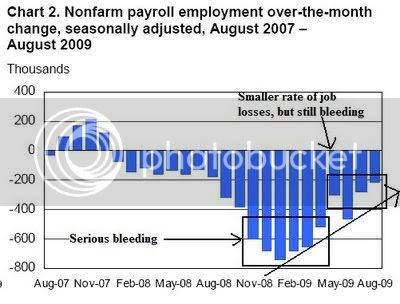 I encourage your to click through to Econbrowser and read the entire December 2008 article. Why? Because here is the updated projection of the jobs graph in the article posted Monday: 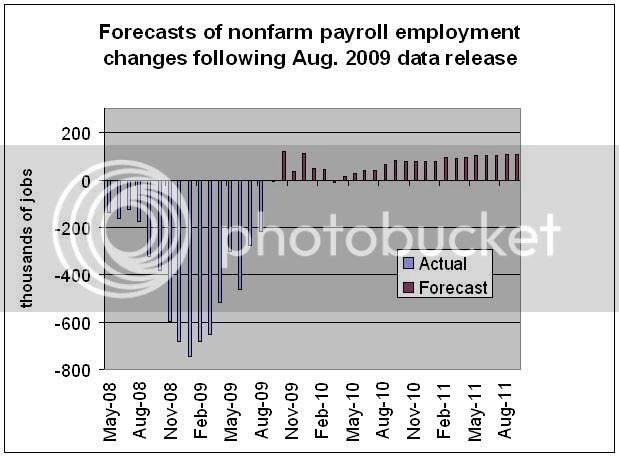 Your eyes are not deceiving you. The updated forecast calls for miniscule job losses this month, and actual growth of almost 100,000 jobs in October.

So far this year, business cycle models have been spot on, producing results diametrically opposed to the almost uniformly bearish "fundamental analysis" in the econoblogosphere.

But even I have problems going as far as Duecker. As I understand it, basically Hamilton's model considers recesssions/recoveries like an "on/off" switch for interpreting data. Depending on which you are in, you get different results. At least we won't have to wait long to see how accurate Duecker's prediction is. Per my prior posts, we would need a very quick drop of jobless claims to 500,000 or under in the next few weeks to coincide with the flat payroll projection Duecker makes for September -- and of course, we get our next installment tomorrow morning.
Posted by New Deal democrat at 2:00:00 PM