It's Not About Lending

The previous version of the U.K. rescue plan has failed to stem economic erosion or to revive lending. How much worse it will get for banks remains largely unknown. That was made plain on Monday when RBS said it expects to report a 2008 loss of £22 billion to £28 billion ($31.8 billion to $40.5 billion). Under the latest rescue provisions, the government's share of RBS will increase to 70% from 58%. RBS shares fell 67% on Monday.

In the US, we are in the middle of a recession that has gone on for over a year. According to the FDIC's latest Quarterly Banking survey, banks are in extremely bad shape:

Troubled assets continued to mount at insured commercial banks and savings institutions in the third quarter of 2008, placing a growing burden on industry earnings. Expenses for credit losses topped $50 billion for a second consecutive quarter, absorbing one-third of the industry's net operating revenue (net interest income plus total noninterest income). Third quarter net income totaled $1.7 billion, a decline of $27.0 billion (94.0 percent) from the third quarter of 2007. The industry's quarterly return on assets (ROA) fell to 0.05 percent, compared to 0.92 percent a year earlier. This is the second-lowest quarterly ROA reported by the industry in the past 18 years. Evidence of a deteriorating operating environment was widespread. A majority of institutions (58.4 percent) reported year-over-year declines in quarterly net income, and an even larger proportion (64.0 percent) had lower quarterly ROAs. The erosion in profitability has thus far been greater for larger institutions. The median ROA at institutions with assets greater than $1 billion has fallen from 1.03 percent to 0.56 percent since the third quarter of 2007, while at community banks (institutions with assets less than $1 billion) the median ROA has declined from 0.97 percent to 0.72 percent. Almost one in every four institutions (24.1 percent) reported a net loss for the quarter, the highest percentage in any quarter since the fourth quarter of 1990, and the highest percentage in a third quarter in the 24 years that all insured institutions have reported quarterly earnings.

In Every Beige book issued in 2008 has indicated credit conditions were tightening and loan demand was decreasing.

Reports from banks and other financial institutions noted further declines in residential real estate lending, and lending to the commercial real estate sector was generally described as mixed. Some Districts reported lower consumer loan volumes, whereas the volume of commercial and industrial lending varied. Most Districts cited tighter credit standards.

Financial institutions in many Districts indicated some deceleration in consumer loan demand, tightening in lending standards, and deterioration in asset quality

Lending activity also varied across Districts and market segments, though tighter credit standards were reported for most loan categories.

Credit conditions were characterized as being tight across the twelve Districts, with several reporting reduced credit availability for both financial and nonfinancial institutions

In addition to the Beige Book, the Federal Reserve issues a Senior Loan Officer Survey every three months. These reports stated the following:

In the January survey, domestic and foreign institutions reported having tightened their lending standards and terms for a broad range of loan types over the past three months. Demand for bank loans reportedly had weakened, on net, for both businesses and households over the same period.

Compared with the January survey, the net fractions of banks that tightened lending standards increased significantly for consumer and commercial and industrial (C&I) loans. Demand for bank loans from both businesses and households reportedly weakened further, on net, over the past three months, although by less than had been the case over the previous survey period.

In the current survey, large net fractions of domestic institutions reported having tightened their lending standards and terms on all major loan categories over the previous three months. In particular, the net fractions of banks that had tightened credit standards on consumer loans increased notably relative to the April survey.

In the current survey, large net fractions of domestic institutions reported having continued to tighten their lending standards and terms on all major loan categories over the previous three months. The net percentages of respondents that reported tightening standards increased relative to the July survey for both C&I and commercial real estate loans, as did the fractions reporting tightening for all price and nonprice terms on C&I loans. 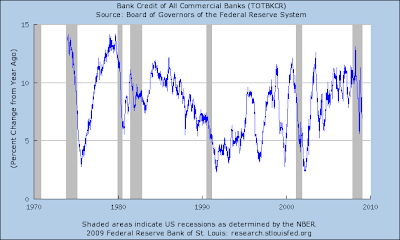 Total credit is dropping on a year over year basis, 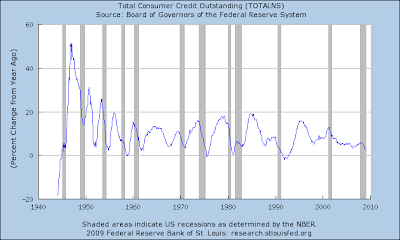 As is consumer credit.

And then we have this from the incoming administration:

The new team will manage the TARP “in a much different way,” David Axelrod, Obama's chief political adviser, said Jan. 18 on ABC's “This Week” program.

“He is going to have a strong message for the bankers,” Axelrod said. “We want to see credit flowing again.”

Another aide went further, criticizing the results of TARP under Paulson.

“Anyone who looks at it has got to be disappointed when they look at what's happened to lending, have got to think the results have been unsatisfactory,” Lawrence Summers, director-designate of the National Economic Council, said on CBS's “Face the Nation” program Jan. 18.

Simply put, we are not in a credit expansion friendly environment. That is not the point of what is happening. The government is attempting to prevent a broad-based financial meltdown. That's the metric for judging the current action.

They are making things up as they go along in this process -- that is incredibly obvious. But it's also important to remember, the last time we were here was 1929. It's been awhile. And while there has been a lot of debate about how to prevent a wide scale financial meltdown, there has been little practice at it.
Posted by Unknown at 9:30:00 AM