South Korea's economy shrank a more-than-forceast 5.6% in the fourth quarter, its worst performance in a decade, showing how hard the global downturn is hammering Asia's exporters.

"It's far worse than expected," said Standard Chartered economist Chun Chong-woo. "Today's data will spur the central bank to move to cut (interest) rates further to 1.5% by the end of the first half."

The seasonally adjusted gross domestic product figure for the October-December period compares to 0.5% growth in the third quarter, according to preliminary data issued by the Bank of Korea on Thursday.

And Singapore is not looking so hot:

Singapore, a bellwether for Asia's export industry, sharply reduced its economic outlook for 2009, prompting concerns that the region's slowdown is intensifying and putting additional scrutiny on a slew of economic figures expected in coming days.

The city-state said Wednesday it expects its economy to shrink by 2% to 5% this year. The forecast marks a downward revision from just three weeks ago, when officials at Singapore's Ministry of Trade and Industry predicted a worst-case decline of 2% and possible growth of 1%. The ministry blamed increasingly pessimistic signals of weakening global demand for key products such as electronics and chemicals.

Let's take a look at the respective indexes via ETFs. As always, click on each image for a larger image: 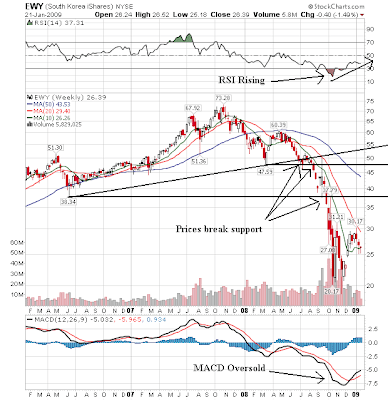 Notice the following on the South Korean ETF

-- Like the US, prices plunged in the second half of last year; the market lost about 50% of it's value

-- The 10 week SMA is moving sideways

-- The RIS is rising

-- The MACD is oversold 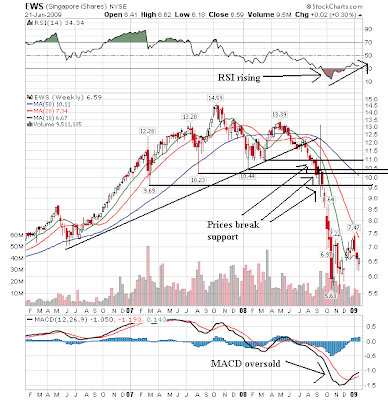 Notice the following on Singapore's chart:

-- Prices dropped hard in the second half of last year, losing about half their value

-- The 10 week SMA is moving sideways

-- The MACD is oversold

-- The RSI is rising