Bernanke spoke to Congress on Wednesday. His opening statements provide a good outline of where the economy is presently. I have interspersed his comments with some news stories and various graphs to clarify Barnanke's points. I have separated his comments by indenting and italicizing them.

Here is a link to his complete testimony.

The economic situation has become distinctly less favorable since the time of our July report. Strains in financial markets, which first became evident late last summer, have persisted; and pressures on bank capital and the continued poor functioning of markets for securitized credit have led to tighter credit conditions for many households and businesses. The growth of real gross domestic product (GDP) held up well through the third quarter despite the financial turmoil, but it has since slowed sharply. Labor market conditions have similarly softened, as job creation has slowed and the unemployment rate--at 4.9 percent in January--has moved up somewhat.

Employment isn't looking that hot either:

Year over year job growth has been dropping for about a year and a half and is now negative.

Also note the unemployment rate is edging up.

Many of the challenges now facing our economy stem from the continuing contraction of the U.S. housing market. In 2006, after a multiyear boom in residential construction and house prices, the housing market reversed course. Housing starts and sales of new homes are now less than half of their respective peaks, and house prices have flattened or declined in most areas. Changes in the availability of mortgage credit amplified the swings in the housing market. During the housing sector's expansion phase, increasingly lax lending standards, particularly in the subprime market, raised the effective demand for housing, pushing up prices and stimulating construction activity. As the housing market began to turn down, however, the slump in subprime mortgage originations, together with a more general tightening of credit conditions, has served to increase the severity of the downturn. Weaker house prices in turn have contributed to the deterioration in the performance of mortgage-related securities and reduced the availability of mortgage credit.

The housing market is expected to continue to weigh on economic activity in coming quarters. Homebuilders, still faced with abnormally high inventories of unsold homes, are likely to cut the pace of their building activity further, which will subtract from overall growth and reduce employment in residential construction and closely related industries.

New home sales have been dropping for awhile.

Existing home sales have been as well

I dealt with housing this week in this article.

Consumer spending continued to increase at a solid pace through much of the second half of 2007, despite the problems in the housing market, but it appears to have slowed significantly toward the end of the year. The jump in the price of imported energy, which eroded real incomes and wages, likely contributed to the slowdown in spending, as did the declines in household wealth associated with the weakness in house prices and equity prices. Slowing job creation is yet another potential drag on household spending, as gains in payroll employment averaged little more than 40,000 per month during the three months ending in January, compared with an average increase of almost 100,000 per month over the previous three months. However, the recently enacted fiscal stimulus package should provide some support for household spending during the second half of this year and into next year. The business sector has also displayed signs of being affected by the difficulties in the housing and credit markets. Reflecting a downshift in the growth of final demand and tighter credit conditions for some firms, available indicators suggest that investment in equipment and software will be subdued during the first half of 2008. Likewise, after growing robustly through much of 2007, nonresidential construction is likely to decelerate sharply in coming quarters as business activity slows and funding becomes harder to obtain, especially for more speculative projects. On a more encouraging note, we see few signs of any serious imbalances in business inventories aside from the overhang of unsold homes. And, as a whole, the nonfinancial business sector remains in good financial condition, with strong profits, liquid balance sheets, and corporate leverage near historical lows. 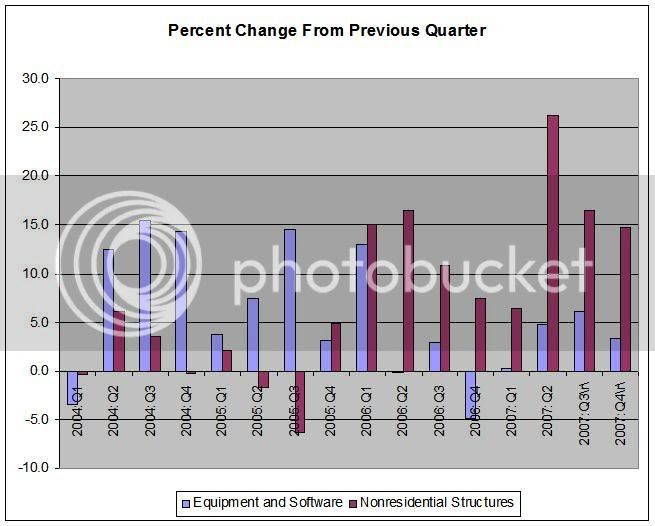 Ben's right about business investment -- it's been pretty strong. But with the credit crunch, I have to wonder how long that can last. My guess is a lot of the growth we've seen over the last two quarters comes from deals that started before the credit markets fell apart. The next few quarters will be crucial to determining if the trend continues.

Overall industrial production is doing fine. But you have to remember this figure includes all production such as utilities.

The Philly and Empire State indexes tell a very different tale. They show a lot of pullback.

And last months durable goods numbers weren't that good -- and durable goods orders have been negative from a year over year perspective for the last year.

The only good picture in all of this is exports -- one of the few benefits of a crashing dollar.

Bottom line: Ben has a lot of reasons to be concerned right now.
Posted by Unknown at 4:14:00 PM