This is a very ugly daily chart.

1.) The overall direction is down -- big time down.

2.) There are three downward gaps that occurred on heavy volume. That's not good.

3.) The market closed at the low point, on heavy volume just after the third gap down. That's a triple whammy of bad events. Traders didn't want to hold positions overnight because they were concerned something would happen between now and the open that would lower stock prices.

Why are gaps down bad? To Quote Bulkowski from Encyclopedia of Chart Patterns, "...in both cases [of upward and lower gaps] some type of exuberance is driving the stock to create a gap (page 241)." In other words, there is a strong emotional reason for the change. It's safe to say that a downward gap is a sign of extreme concern. When there are three gaps on a single day, it's s sign of really extreme concern.

The 9-day chart shows the SPYs were in a three and a half day consolidation/trading range. But they broke through support on heavy volume at the end of trading. Breakdowns indicate a change in sentiment. When they occur on heavy volume sentiment it's that much more intense.

The SPYs daily chart shows we have broken through support and the 200 day SMA on heavy volume. Again a triple whammy.

The 10-day QQQQ chart shows they too were in the middle of a consolidation pattern, but they also broke through support on heavy volume at the close of the market. This is not good.

The daily QQQQ chart shows the index broke though the support of the 10 and 20 day SMA on heavy volume. That's very bad.

In addition, consider these two charts from stockcharts.com. 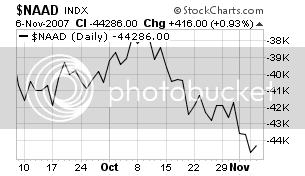 Both of these charts tell us that fewer and fewer NASDAQ stocks were responsible for the index's gains. That indicates there was a lack of breadth across a wide swath of stocks.

Short version -- this day was terrible. It did a lot of technical damage.
Posted by Unknown at 3:06:00 PM