One of the Stupidest, Dumbest, Most Moronic Ideas of the Year

Financial stocks rallied yesterday, as evidenced by the strong green bar and heavy volume. The reason? Bottom fishing. But I will once again warn anybody that is thinking financial stocks are cheap right now: buying into the financial sector right now is stupid, moronic and perhaps one of the dumbest ideas I have ever heard.

And I am not alone:

Back around 2000, when the cracks first appeared in the big-cap technology shares that had been the source of great fanfare for quite a time, one of the popular views that surfaced was that these stocks — after enduring a harsh selloff — were cheap simply because they had fallen so far from their previously lofty heights. Of course, that proved to be a fool’s game.

This phenomena has resurfaced, somewhat disconcertingly, with the financial sector, as the sharp falloffs in the names everybody knows — Citigroup, Merrill Lynch, Washington Mutual — has produced some sniffing around simply because the stocks are off as far as they are. Banks may indeed be cheap. But they’re not cheap because of where they were a month ago.

A number of commentators have mentioned the idea of getting into the banking stocks now based on the sharp pullback, but with certain reservations. “People with a longer-time horizon and higher risk tolerance might want to start looking at some of these banks,” says James Simos, managing principal at Infinity Securities, noting the declines in the financials.

This chart -- which shows the number of resets we have in the next three years and is from the International Monetary Fund -- indicates we're just getting started: 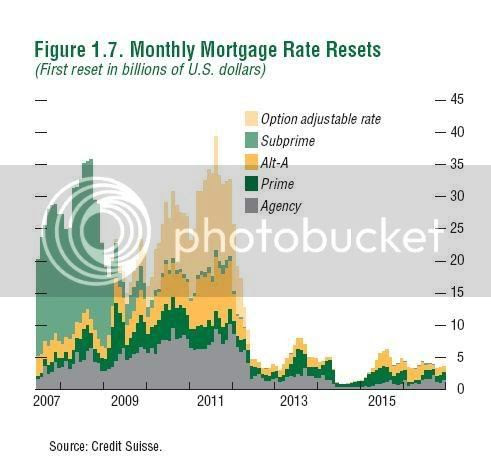 Anyone going long in financial stocks right now -- and anyone offering the advice -- is going to lose people a lot of money.
Posted by Unknown at 3:02:00 PM