Keep and Eye on the 10-Year

This is from a WSJ article on Friday, but it is still important today.

Can anything stop the rally, then? Many analysts noted that the recent rise in bond yields could move money to fixed income and away from equities. "In the short-term I think we're going higher because of liquidity," said Alan Lancz, president of Alan Lancz & Associates. "The caveat is, as interest rates go up, fixed income is a viable option."

Here's a daily chart of the 10-year from Stockcharts. Notice that yields have climbed over the last few months, making the 10-year more attractive. 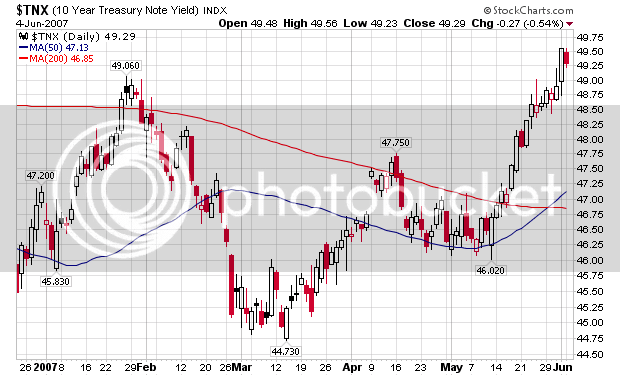 1980 was an incredibly difficult time for the economy as inflation was at incredibly high levels. Ever since Volvker's tenure at the Fed inflation has been far less an issue in the US economy. Hence, lower interest rates.

While the 10-year is cheap by historical standards, it's at a good level by current standards -- that is, judging the yield and value from today's perspective.

Something I find interesting is the 10-year is still trading at levels associated with the end of the 1990s. This is when the Federal Reserve retired the 30-year Treasury because the Federal government actually had a surplus. Compare that to the current situation when the government has issued over three trillion in net new debt over the last 5 years and you have to ask, "shouldn't the 10-year be trading higher?"
Posted by Unknown at 7:02:00 AM