State of the Union: A Nation Off Track

So, we’re all eagerly awaiting President Bush’s State of the Union address to hear the honest facts about the nation’s economy, among other key issues.

Looks like we’ll have to dig up the real deal on our own by taking a gander at some of the recent data and what they portend for us working types.

Tonight, Bush likely will talk about the great economic recovery we’ve seen in the past couple of years. But newly released data from two separate sources reveal just how skewed the distribution of economic growth has been in the current recovery, according to the Economic Policy Institute.

Data from the Bureau of Economic Analysis through the third quarter of 2006 show that a historically high share of corporate income is going into profits and interest (i.e., capital income) rather than employee compensation. And a newly released Congressional Budget Office (CBO) analysis of household incomes shows that a greater share of this capital income goes to the richest households than at any time since the CBO began tracking such trends. In other words, our economy is producing more capital income and that type of income is more likely to go to those at the very top of the income scale. Together, these dynamics are contributing to a uniquely skewed recovery.

So, the economic recovery Bush will tout is mostly about the rich getting richer. And those tax cuts that Bush will call the shining star of his economic acumen? Guess what. They’re helping the rich more than the economy. As Citizens for Tax Justice puts it:

First, the tax breaks enacted since 2001 are heavily skewed toward the very wealthiest few. Second, because the tax cuts are being paid for with borrowed money, the cost of paying the added national debt more than wipes out any benefits from the tax cuts for 99 percent of residents in each state. Only the best-off one percent are net winners from the president’s fiscal policies.

But those tax cuts for the wealthy must do something for the overall economy, right? Indeed. According to the Center on Budget and Policy Priorities:

Congressional Budget Office data show that the tax cuts have been the single largest contributor to the reemergence of substantial budget deficits in recent years. Legislation enacted since 2001 has added about $2.3 trillion to deficits between 2001 and 2006, with half of this deterioration in the budget due to the tax cuts (about a third was due to increases in security spending, and about a sixth to increases in domestic spending). Yet the president and some Congressional leaders decline to acknowledge the tax cuts’ role in the nation’s budget problems, falling back instead on the discredited nostrum that tax cuts “pay for themselves.”

As the Center on Budget and Policy Priorities sums up:

A study by the president’s own Treasury Department recently confirmed the common-sense view shared by economists across the political spectrum: Cutting taxes decreases revenues.

The Bush administration ran the Clinton budget surplus into the ground after less than a year in office—and has kept adding to the national tab so that the United States is now more than $8 trillion in debt (that’s nearly $29,000 for every man, woman and child in the nation). Yet after all these years of draining the federal budget into oblivion, administration cronies now suddenly are sounding the alarm. 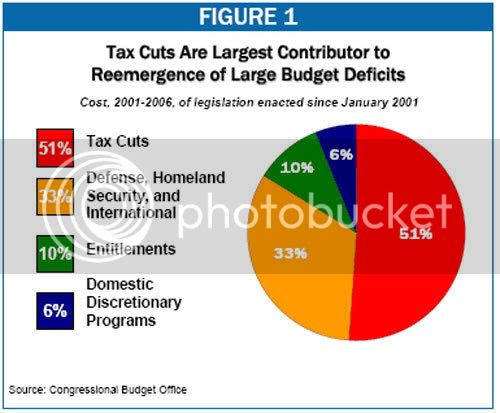 And they’re offering solutions. But they’re not suggesting the nation cut back on the $255 million a day Bush is spending on the Iraq war or back off those tax cut payoffs to wealthy donors. Instead, in a recent speech, Ben Bernanke, Federal Reserve chairman, used a warning about the growing deficit as the opening salvo to attack on what’s left of our country’s successful heath and retirement programs.

Warning against complacency over the federal deficit, Ben S. Bernanke, the Federal Reserve chairman, said Thursday that recent positive trends on the budget were a “calm before the storm” masking a long-term danger posed by looming deficits in Social Security and Medicare.

Bernanke’s comments were consistent with his past warnings, and those of his predecessor, Alan Greenspan, about the unfunded cost of the postwar generation’s retirement. But his tone was more urgent, and it seemed aimed at the arrival of a new Democratic-led Congress that is just now setting its priorities.

Let’s see. The budget deficit is in the dumpster and the Bush administration wants to salvage it by cutting back on retirement and health care. Let’s look at retirement. Without Social Security, millions of retired Americans would struggle in poverty. Between 1960 and 2004, Social Security helped cut the poverty rate among seniors by more than two-thirds, from 35 percent to 10 percent. Social Security takes on more, not less, importance as we go forward, with fewer and fewer workers getting retirement benefits on the job. As AFL-CIO Secretary-Treasurer Richard Trumka said in testimony today before the House Ways and Means Committee:

Only half of American families have an employer-provided retirement plan of any sort, a proportion largely unchanged for decades. However, whereas 40 percent of workers participated in employer guaranteed “defined-benefit” pension plans in 1980, today only 20 percent have such plans. In substituting “defined-contribution” for defined benefit plans, employers are shifting the risk of retirement onto workers. And American workers are ill prepared to carry this risk.

There are a lot of reasons why Bush’s approval rating has tanked, according to recent polls. And it’s pretty clear that Iraq isn’t the only reason 71 percent are saying the country is seriously off track.
Posted by Anonymous at 9:26:00 AM