From the Phily Fed:

The survey’s broadest measure of manufacturing conditions, the diffusion index of current activity, increased from a revised reading of -2.3 in December to 8.3 (see Chart).* This month, 25 percent of the firms reported increased activity; 17 percent reported decreased activity. The new orders and shipments indexes offer mixed signals about the strength of this month’s overall improvement. Demand for manufactured goods has not yet recovered much: The new orders index rose two points, from -0.9 to 1.3, after negative readings for two consecutive months. The shipments index increased 10 points from December; 37 percent of the firms reported an increase in shipments; 13 percent reported a decrease. Indexes for delivery times and unfilled orders remained negative, indicating shorter delivery times and a decline in unfilled orders.

Let's take a look at the general diffusion chart: The gray line (current conditions) has trended down for the last 6 months or so. We saw a longer downtrend from mid-'04 to mid-'05 without a serious problem. That means the most recent decrease could be nothing more than a natural slowdown from peak activity. In addition, we have seen modest increases over the last year, so the recent increase into positive territory could be the beginning of a return to slower but positive production levels. However, we are near the 0 line, so this trend bears watching.

The new orders index rose two points, from -0.9 to 1.3, after negative readings for two consecutive months.

Here's some good news in the report: 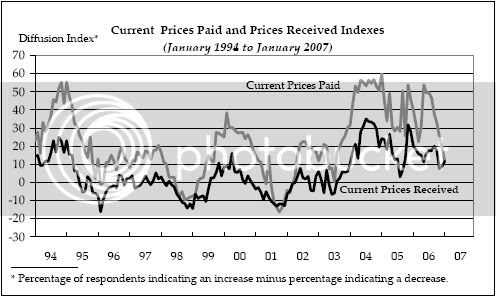 The prices paid component has dropped for the last 6 months. This is good news on the inflation front.

The current employment index was virtually unchanged from its revised December reading.

The large productivity gains have translated into fewer manufacturing employees. There is no reason to think this trend won't continue.

The short version is all the recent manufacturing numbers have showed a slightly positive reading not strong enough to warrant extreme optimism, but enough to warrant a soft-landing.
Posted by Unknown at 7:37:00 AM