Let’s take a look at the new month’s first data, on manufacturing and construction.

The ISM manufacturing index, and especially its new orders subindex, is an important short leading indicator for the production sector. In June, for the first time, the leading new orders index showed slight contraction, declining below 50 to 49.2 from 55.1. The overall index continued to show expansion, but also declined from 56.1 to 53.0:

This is important. The reason why is shown in this long term graph of the new orders index going all the way back to 1948: 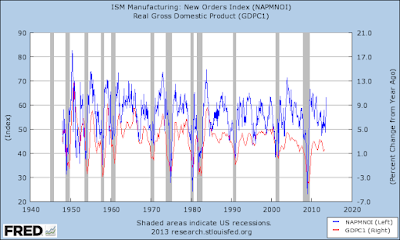 Going back almost 75 years, the new orders index has always fallen below 50 within 6 months before a recession, and in three cases did not actually cross the line until the first month of the recession itself.
In other words, going by this metric alone it is *possible* that the US entered a recession in June, and increasingly likely that it will enter recession no later than Q1 of next year.
Meanwhile, construction spending declined - 0.1% in nominal terms in May, but April’s number was revised up from 0.2% to 0.8%. The more leading residential sector rose a mere 0.2%, although April was revised sharply higher, from 0.9% to 1.7%. Both thus again made new highs:

It remains the case that while the decline in residential construction spending, while substantial, is at roughly on par with its 2018-19 decline, and was nowhere near the -40.1% decline it suffered before the end of 2007.
Last month I wrote that “it takes awhile for the downturn in mortgage applications, sales, and permits to filter through into actual construction, especially with record numbers of housing units permitted but not yet started.” This month may be just noise, or it may be the beginning of that turn.
Posted by New Deal democrat at 9:51:00 AM