Coronavirus dashboard for July 11: BA.4&5 now over 80% of cases without creating a new wave, as COVID heads toward endemicity 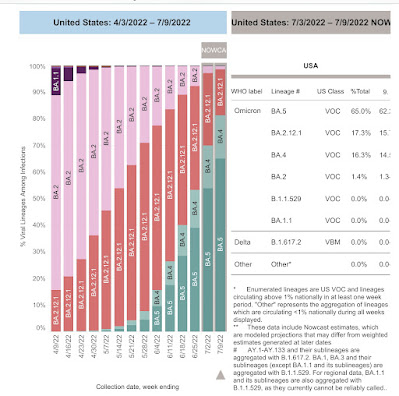 Regional disparities among the variants have all but disappeared with the slight exception of the Mid-Atlantic, where BA.4&5 make up a slightly lower percentage of cases, and BA.2.12.1 still makes up a slightly higher percentage: 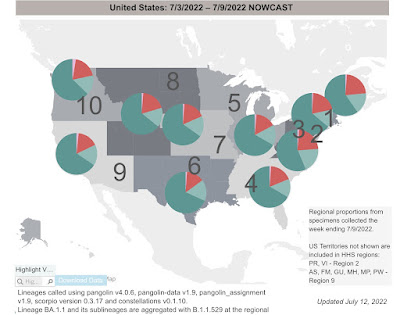 The 12 week view of confirmed infections and deaths shows that the two new variants have almost completely supplanted both the original BA.2 variant as well as BA.2.12.1, but without giving rise to any new “wave” of increased infections or deaths at all: 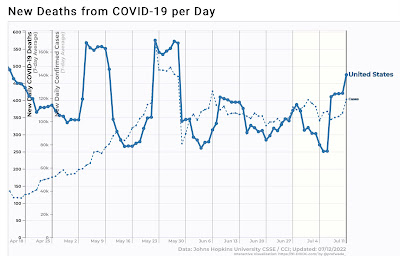 Cases have been in the range of 100,000-110,000 for over 8 weeks, and deaths in the range of 275-350 for 10 weeks.
[Note: Oklahoma had a big data dump of deaths a few days ago; without that deaths would not have increased at all in the past week until yesterday, which was likely a result of comparison with non-reporting on July 4 one week prior.]
There has been plenty of information that, due to home testing, confirmed cases are undercounting actual cases by a large amount. But when we turn to BIobot’s graph of nationwide wastewater testing results, we see that, while “actual” cases as indicated by wastewater are 2.5x the number of “confirmed” cases, the trend of the two is similar: 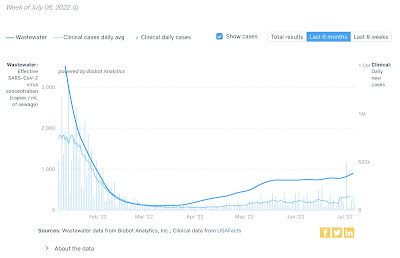 In other words, between mid-May and the end of June, there was no increase in cases whatsoever. Since then wastewater has indicated that cases have increased by roughly 10%.
Since cases have almost always peaked by the time a variant reaches 90% of the total, which is likely to occur in about one week, BA.4&5 are not likely to be creating so much of a wave as a ripple.
The longer term view of deaths (solid line) compared with cases (dotted line) continues to show that each new variant has resulted in fewer deaths compared with cases than the previous variant: 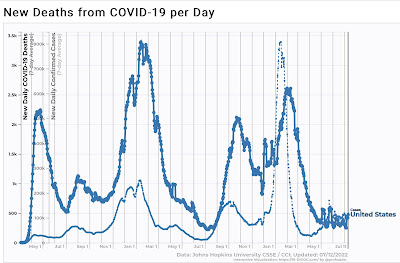 Similarly, below is a graph from Trevor Bedford, an epidemiologist who has been invaluable in estimated the impact of each variant as it has appeared. The graph shows that new variants are appearing with more rapidity, and is replaced by the next variant at lower levels of penetration by the previous variant: 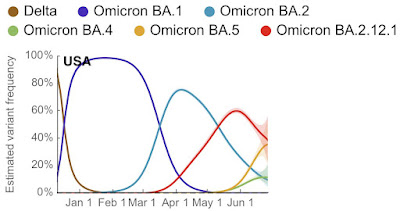 What I see is a disease heading towards endemicity. Last year I was hopeful that, between vaccinations and previous infections, some approximation of herd immunity would be reached and the disease would fade into the background. Instead it is clear that the disease is evolving towards the ability to repetitively infect survivors.
Consider the following: if the first line defense of the immune system, antibodies, fade over (for example) 6 months; and there are two similarly infectious variants beginning to circulate; then the variant that is least like the variants circulating in the past 6 months is the one that is going to predominate. Because the variants most like the ones circulating in, say, the last 3 months, are going to be most susceptible to being neutralized by existing antibodies still active in peoples’ immune systems. The variant least likely to be neutralized by those antibodies, vs. antibodies that have already faded away over time, is the one that is going to take over.
And so we see a fairly rapid turnover of variants; but on the other hand, because B-cells and T-cells are relatively permanent, those lines of defenses are increasingly able to blunt serious disease among those whose immune systems are not weak or compromised. So the death rate is much lower than before, but remains concentrated among the elderly (of course, those elderly most susceptible to COVID probably already died of it in 2020 or 2021).
The next variant of concern appears to be BA.2.75, which started in India in May and has spread to many countries since, but has not yet become dominant in any other country. If it follows the pattern of BA.2.12.1 and BA.4&5, it will take over dominance in the next several months, but there will not be a big spike in the number of infections, as had been the case in 2020 and 2021.
Posted by New Deal democrat at 10:28:00 AM