Coronavirus dashboard for June 23: And so, it (the delta wave) begins

[Note: New home sales will be reported later this morning, and I will post on that report afterward.]

There is now more evidence that the “delta” variant of COVID is taking hold in the unvaccinated regions of the country, and case counts are increasing accordingly.
Below are the 5 States that have all seen unequivocal increases in new cases over the past 2 to 4 weeks: 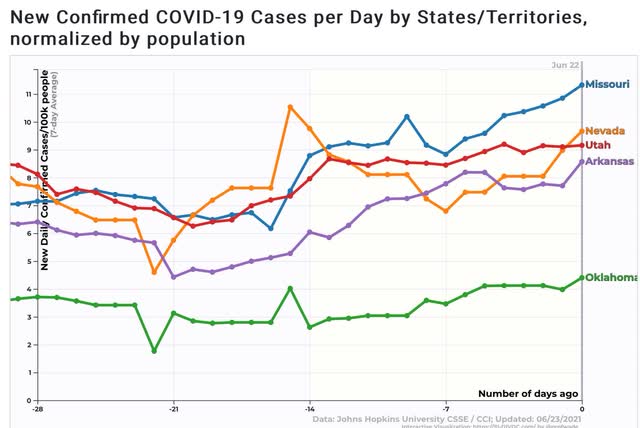 *All* of these except for Nevada are among the lowest 1/3rd of States for vaccinations. Arkansas, at 33% fully vaccinated, is the 3rd worst. Oklahoma and Utah, at 37%, are tied for 8th worst, and Missouri, at 38%, is tied for 12th worst. Only Nevada, at 41%, is closer to the middle of the pack.
As an aside, the 2 worst States for vaccinations, Mississippi at 29% and Alabama at 32%, almost certainly are in worse shape than their “official” new case counts. Although I won’t post graphs, both are among the 10 worst States for the rate of testing, and both are among the 10 highest States for the rate of positive test results (along with 4 of the 5 States above experiencing new outbreaks). Their rate of positivity hasn’t started significantly increasing - yet.
Because I am not a DOOOMsayer, I want to contrast this with the case of Colorado, which has a good  full vaccination rate at 50%, is nearly surrounded by States doing poorly, and yet has case counts that have continued to decline, albeit from high levels: 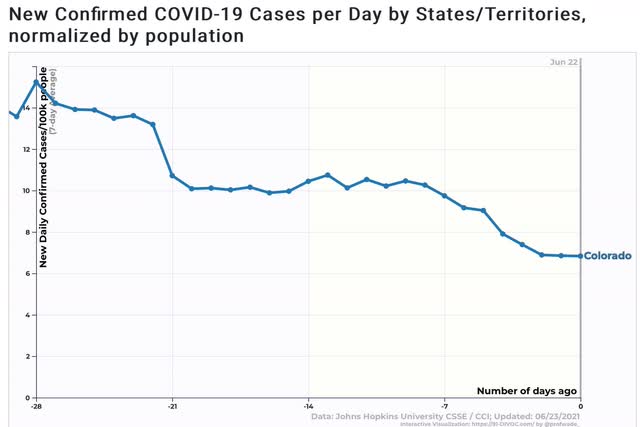 Colorado will make a very good bellwether for whether high levels of vaccinations will slow or stop the delta spread.