The historical use of the filibuster in the Senate

I came across the below table and explanation in the twitter feed of Matt Yglesias, I think, and wanted to post it here for preservation. It is a recapitulation by decade through 2009 of the use of the filibuster, and cloture motions, in the Senate: 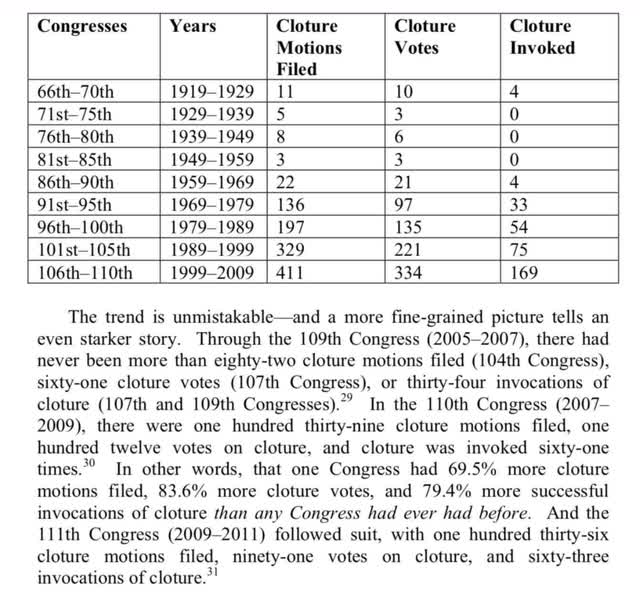 Note that in the two year period of 2007-09, cloture was invoked more often than in the entire decades before 1980. And the Congress of 2009-11 had even more cloture motions than that.

In short, the filibuster has gone from a rarely-used, extreme instrument, to an ordinary course of business during our lifetimes.

Beyond that, as it currently exists, the filibuster overwhelmingly favors the GOP agenda. Since they don’t want to pass any new programs, or even enforce existing ones, a 60 vote requirement to enact those suits their purposes.  But the two things they *do* want - tax cuts and conservative judges - can be enacted with simple 50+1 vote majorities.

The only downside for Democrats, if they did away with the filibuster - and it’s a big one -  is that the GOP would use the new rules to repeal whole rafts of one-standing progressive enactments - like Social Security, Medicare, and   the EPA - the next time they get the trifecta of House, Senate, and Presidential victories. Since an extreme backlash would follow, democrats would have to re-enact those things after the next Presidential election if they were victorious.

But the current situation is simply intolerable.