The GOP has crossed the Rubicon

In the Roman Republic, military leaders automatically lost their legal authority to command at the Rubicon River in northern Italy. When Julius Caesar crossed the Rubicon with his legions, it was an act of war against the Republic. With the filing of their  Amicus brief in the Supreme Court this past week, the GOP as represented by their Congressional delegation similarly finally broke with the idea of American democracy itself.

For the first several weeks after Trump’s railing against the election results, the GOP simply took the position that he was entitled to pursue legal remedies if he believed he was wrong. The mask was ripped off, and that pretense abandoned, when in their brief, the GOP took the core position  not just that there were allegations of errors which were entitled to be explored, but rather ***asserted as a fact*** that millions of votes in 4 swing States were invalid and should not be counted. Not because dead people voted, or people not properly registered had voted, but rather simply on the flimsiest of assertions that actions by Courts and Executive officials carrying out their respective States’ election laws rendered all of the votes cast in good faith reliance upon the law by millions of voters in those States null and void.
Here’s the “Summary of Argument” from the GOP Brief: 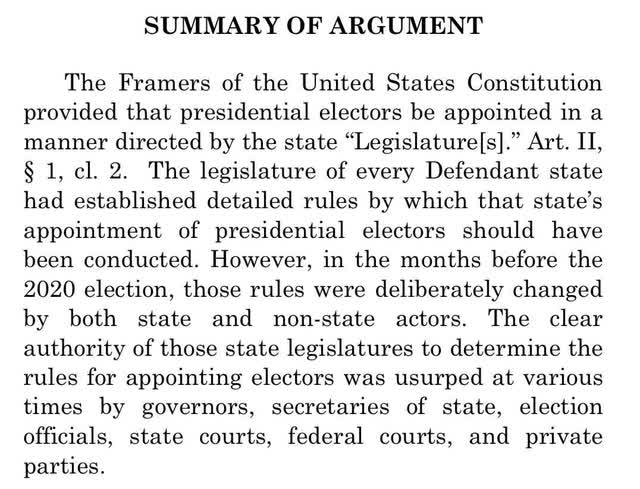 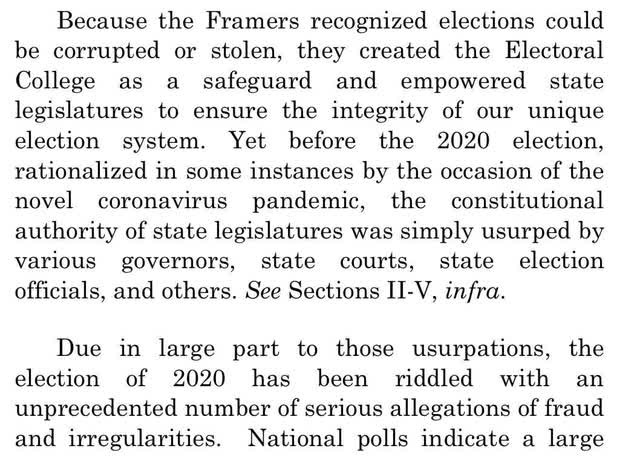 And here is a sample of their assertions against the 4 swing States.
Georgia 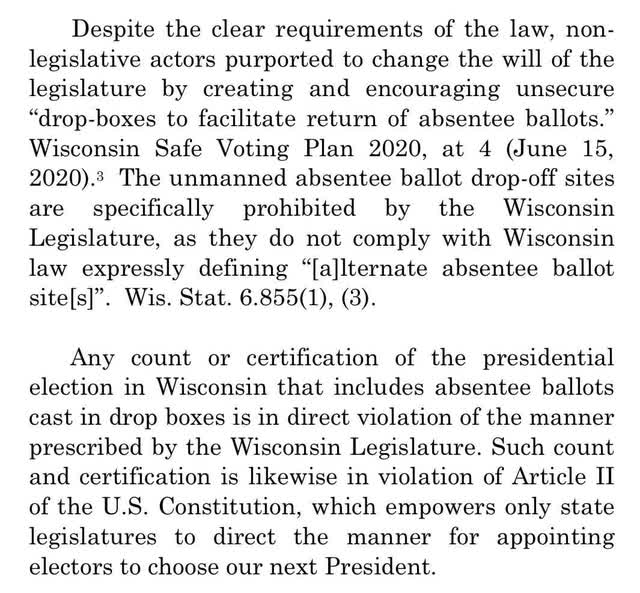 Not a single one of these assertions indicates that any of the votes so cast were not by US citizens who were properly registered to vote, and were acting in good faith relying upon their State’s guidance.
While the Electoral College will cast their votes on Monday, it is crystal clear that on January 6, when the new Congress convenes to confirm the election, GOP Senators and Representatives will en masse object to the counting of these 4 States’ Electoral votes, and perhaps the Electoral votes by other swing States as well. Meaning that if there were a GOP majority in the House, they would refuse to confirm Biden’s election and instead declare Trump the winner.
In short, we have reached the point where the GOP as an institution has declared that if it has the power to do so, it will overturn a Presidential election vote for the Democratic candidate. They have crossed the Rubicon, and no longer support democracy in America.
Posted by New Deal democrat at 8:33:00 AM