The 2020 Presidential and Senate nowcast: birds coming home to roost

Now that we are only 23 days from Election Day, let me update and revise a few comments. First of all, while polls are really only nowcasts - snapshots of the present, rather than forecasts - at this point they are probably only about 2% off the final result: 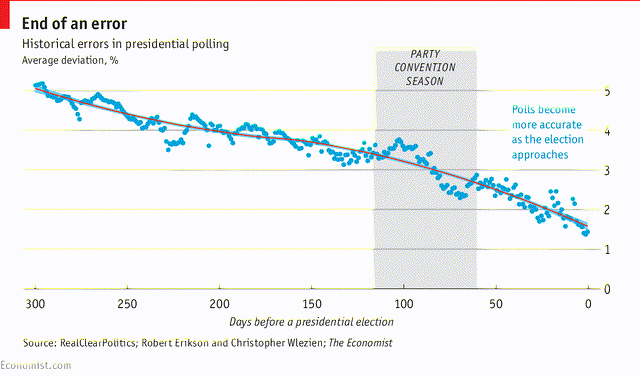 A dditionally, all of the important COVID and economic information is already “baked in the cake.” There is nothing that is going to greatly change perceptions for either outlook (unless one of Trump’s inner circle were to die of the disease). The one issue that is likely to be very front and center in the next several weeks is the Supreme Court. So far I have not seen any polling indicating which if either of the candidates might benefit.

Further, I expect that we are already seeing marginal voters “come home” to their respective parties, as will be apparent in the maps below.

Because of the vast increase in the numbers of early voters in States where voting is already underway, it’s not clear at all that polls in late October or the first several days of November should receive increased weight. Beginning next week, my plan is to slightly increase the weighting of any polls conducted during October vs. September, and leave it at that.

Finally, because the polling has become extremely persistent, when we get to the last week before the election I will probably move any State with a 1%+ differential to “lean Democrat/GOP, rather than stay with 3%.

Trump had a particularly bad past 12 days - and as a presumed result of which, his approval rate has declined all of -0.6%, while his disapproval rate has increased by +0.9%. Needless to say, this is well within the normal range of approval going back 3.5 years: 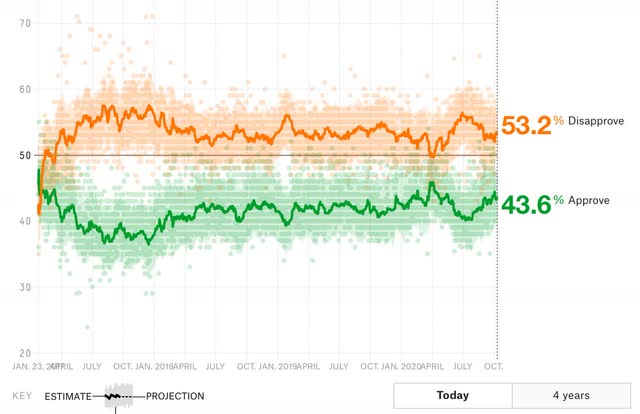 Here is this week’s updated map through October 10 for the Presidential election. To refresh, here is how  it works: 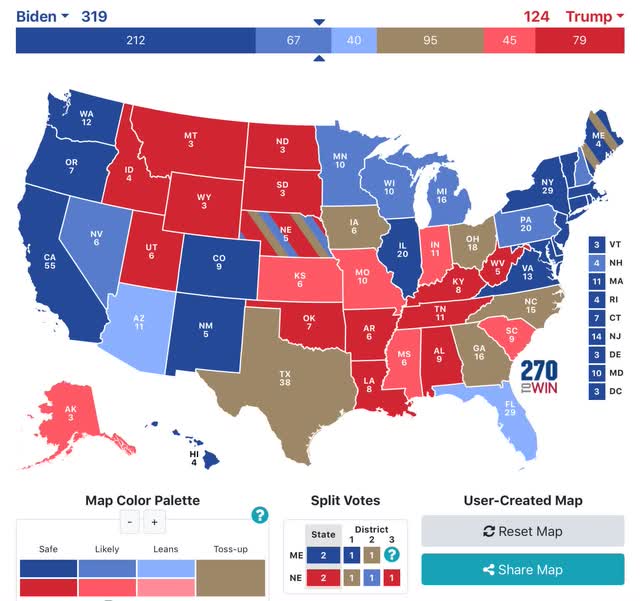 Two weeks ago there were a number of changes adverse to Biden. This week they have all disappeared. Additionally, both Indiana and Mississippi went from “solid” to “likely” GOP, on the basis of relatively weak new polls. But most importantly, Florida has moved back from toss-up to “lean Biden.” I have seen lots of information that seniors have decisively soured on Trump, and it appears to be showing up there.

Biden’s “solid” plus “likely” Electoral College votes remained at 279 this week, below their peak of 302 two months ago. In other words, Biden doesn’t even need Florida or Arizona in order to win.

Biden’s support also improved to 50%+ in Arizona, in addition to Michigan, New Hampshire, Pennsylvania, Wisconsin, and Minnesota. This makes it extremely hard for Trump to mount a successful comeback in those States.

Turing to the Senate, there were 3 changes: Montana went from toss-up to “lean GOP,” while Iowa, importantly, went from toss-up to “lean Democrat.” Additionally, we have more clarity in the 2nd Georgia “jungle primary” election. It appears that Democrat Warnock will make it through to the finals. But once there, the combined GOP vote looks to be nearly 10% more than the combined Democrat vote. I have thus moved the race to “likely GOP”: 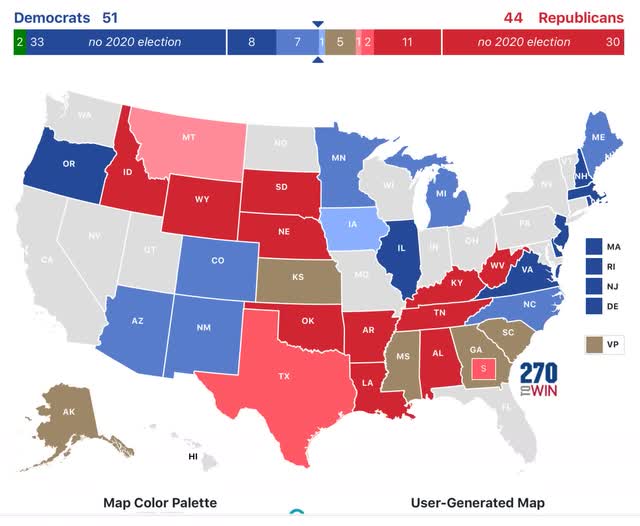 At current polling, if Democrats win all those races in which they lead, they will have 51 seats. The number of “toss-ups” has declined to 5.

A Biden victory and a majority Democrat Senate looks increasingly likely, which is probably why we are beginning to see a few Senate Republicans publicly put distance between themselves and Trump.