The 2020 Presidential and Senate polling nowcast: shift in the control of the Senate to democrats looks increasingly likely

Here is my weekly update on the 2020 elections, based on State rather than national polling in the past 30 days, since that directly reflects what is likely to happen in the Electoral College. Remember that polls are really only nowcasts, not forecasts. They are snapshots of the present; there is no guarantee they will be identical or nearly identical in early November.Let’s begin with Trump’s approval. After several weeks of improvement, last week Trump’s approval eroded very slightly, and this week was virtually unchanged - and remains right in its normal range for the past 3 1/2 years: 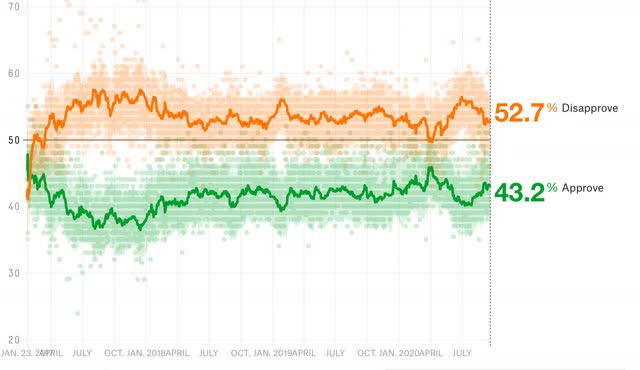 KY and LA went from likely to solid Trump. Meanwhile Maine’s 2nd Congressional district went from toss-up to lean Biden.While Biden’s “solid” plus “likely” Electoral College votes have declined from their peak of  302 seven weeks ago, this week they are at 284 from their low two weeks ago of 279.I believe the public’s perception of both the economy and Trump’s handling of the pandemic have congealed. I do expect some further incremental improvement in Trump’s position as voters who were leaning GOP “come home.”The passing of Justice Ginsburg can only be likened to igniting thermonuclear war over the Supreme Court. Intensity on both sides is going to be white hot, and turnout is likely to be even heavier, if that were possible. I do not dare predict at this time which side might *relatively* benefit at the polls.Turing to the Senate, there have also been 4 changes this week, all but 1 benefitting the democrats: 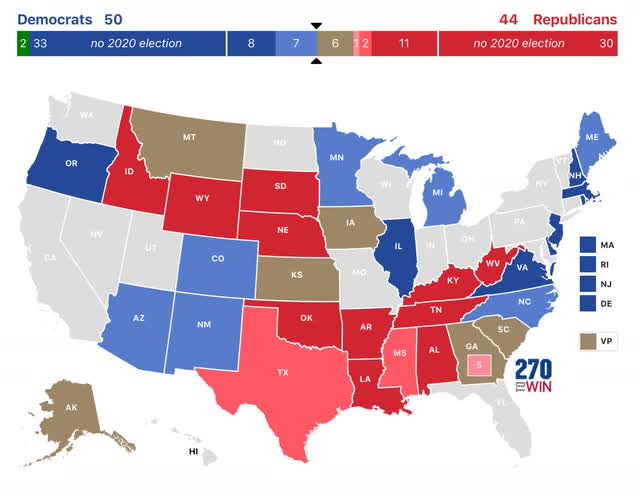 MT and SC both improved from “lean GOP” to toss-up. GA’s second Senate seat moved from “likely” to “lean GOP.” Meanwhile KY moved from “likely” to “solid GOP.” Democrat donors who are contributing to Amy McGrath’s race against Mitch McConnell are lighting their money on fire; it would do much better good elsewhere.At current polling, if Democrats win all those seats rated “solid” and “likely,” they will have 50 Senate seats; up to 56 with the “toss-ups,” and 57 if they were to capture the “lean GOP” seat. Shift in the control of the Senate is looking more and more likely.