Coronavirus dashboard for September 23: a pandemic course veering between panic and complacency

Total US confirmed infections:  6,896,218*
Infections, average last 7 days: 43,411
Total US deaths: 200,786
Deaths, average last 7 days: 715
*my best guess is that the real number of total infections is roughly double that number, or about 14 million.
One of my consistent points over the past several months has been that, until there is competent federal leadership and/or an effective vaccine, the course of the coronavirus pandemic in the US would wax and wane as mass behavior varied between complacency and panic.
This point of view has now been validated not just for the US, but for much of the world, as set forth in a piece recently by Joshua Gans, “Reproduction numbers tend to 1 and the reasons could be behavioural:”

[T]his pattern of R falling to about 1 happens across all states in the US and many countries in the world. To be sure, some countries actually suppressed the outbreak with R falling to 0 but for the majority, movement around 1 or just below it seems to be the norm. This regularity has been carefully documented by Atkeson et al. (2020). What happened was people are people and when they know they can catch an infectious disease by physical contact they adjust their behaviour accordingly....

When people understand that there is a dangerous coronavirus circulating, they engage in behaviour that reduces the rate at which they are infected even without governments ordering them to do so. That’s the good news.

The bad news is that these people who react to what the virus is actually doing and similarly going to react when governments put in place various policies. If the government puts in policies that cause people to ‘stay in place’ and have law enforcement patrolling the streets as they did recently in Melbourne, then there isn’t much scope for people to react. But what if we engage in more modest policies such as testing, tracing and isolating which reduces the risk of being infected if you go out or we encourage mask-wearing with a similar desired effect? In that case, because their risk equation changes, people’s behaviour might change and this may have the perverse effect of increasing infection rates or, more assuredly, not reducing them by as much as might be hoped.

And that is precisely where we are, not just in US States, but in a large number of industrialized Western nations.
Let’s start by comparing the US with Canada and the 5 most populous countries in Europe. First, here is the 7 day average rate of new infections: 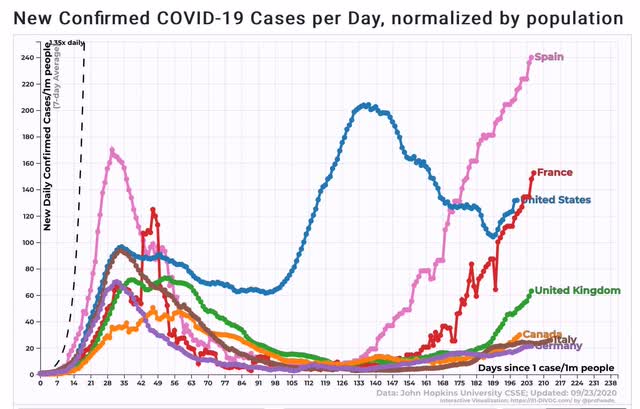 And here are deaths: 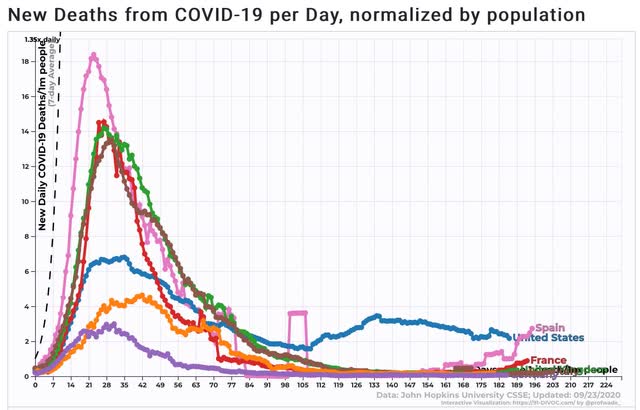 Spain, France, and to a lesser extent the UK are all having serious new outbreaks. The rate of deaths in Spain is already exceeding that of the US, with France gaining. Since deaths follow infections with a several week delay, we can expect further deterioration in those European nations.
Turning to the US, let’s first break things down by region, as to both infections (first graph) and deaths (second graph) 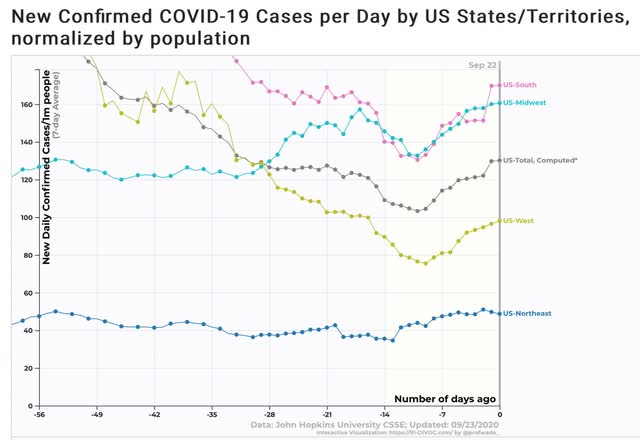 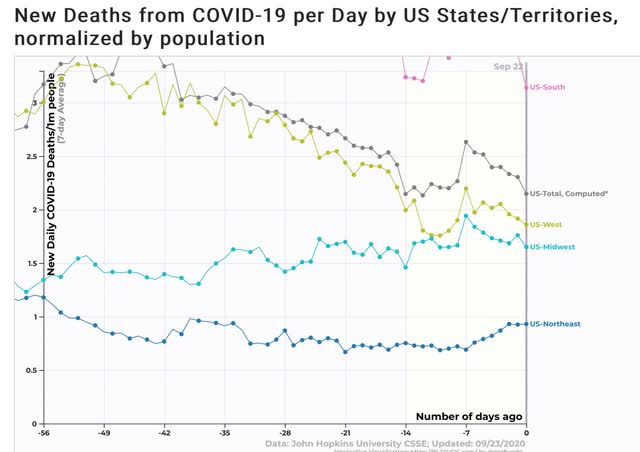 We can see that the panic in the South and West from their uncontrolled outbreaks of July and August led to a steep decline - until complacency set in particularly over Labor Day weekend. Meanwhile the Midwest, which earlier in summer had been making good progress, saw an increase first (most likely) from the motorcycle mass gathering in Iowa, and then again post-Labor Day. Even in the Northeast a little complacency has set in.
Breaking it down further, here are the top 25 States and Territories, first for infections and second for deaths: 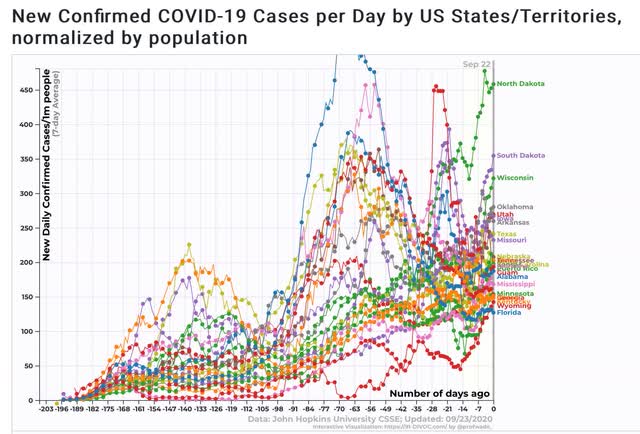 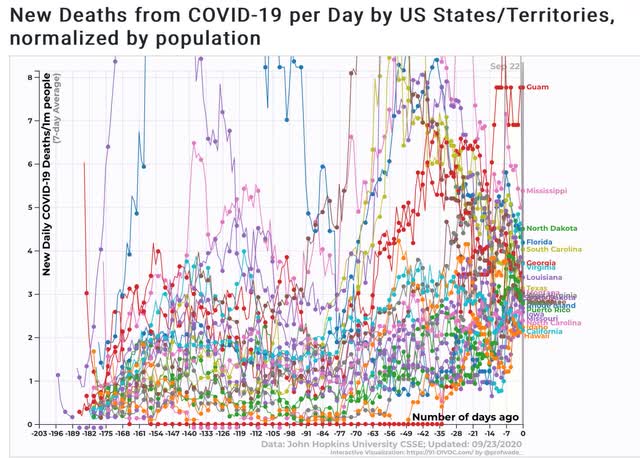 The top 10 in each show a pandemic raging out of control, and verging on uncontrolled in the next 15. This is simply ghastly 6 months into the disease.
Now here are the bottom 10 for infections (first graph) and bottom 10 plus 4 other States where the death rate is averaging less than 1 per million daily: 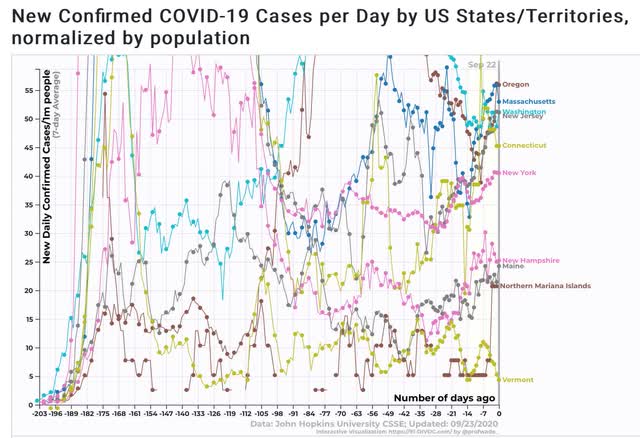 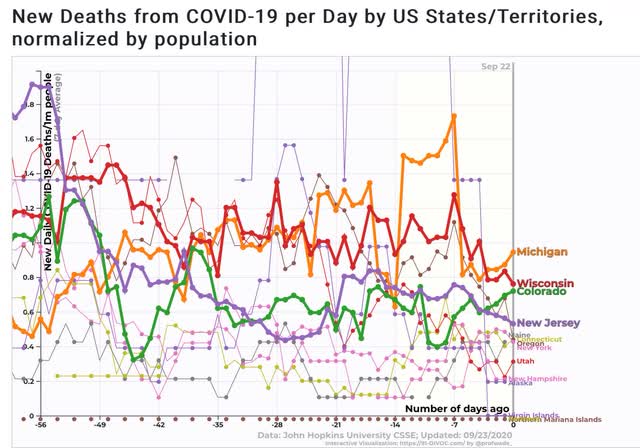 Only the three States of northern New England - Maine, Vermont, and New Hampshire - are on par with neighboring Canada. New York, New Jersey, Connecticut, Massachusetts, and Washington State are reasonably close behind. This too has been the pattern for months: that there are only about 10 States where the pandemic has been brought under control, or nearly so.
Posted by New Deal democrat at 9:08:00 AM