Weekly initial and continuing jobless claims give us the most up-to-date  snapshot of the continuing  economic impacts of the coronavirus on employment. Going on four full months after the initial shock, the overall damage remains huge, with large spreading new secondary impacts. The best that can be said is that the damage is not accelerating - but as is shown below, there is has been negligent progress in the past few weeks. 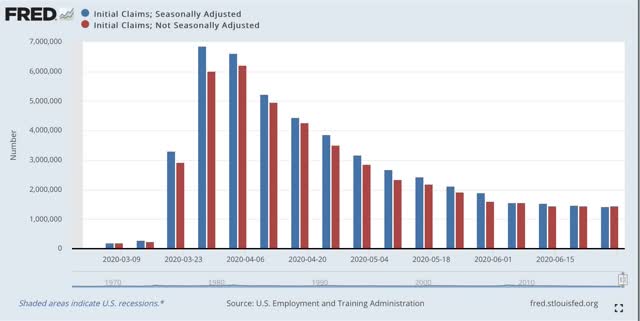 There were 1.445 million new claims, only 15,000 less than one week ago. After seasonal adjustment this became 1.270 million, “only” 59,000 less than last week’s number. While the trend of the past 45 days of slight declines in new claims continues, this is the smallest weekly decline since the worst reading in April. Further, this objectively continues to show huge second-order impacts continuing to spread.

The same flattening trend is apparent in continuing claims, which lag one week behind. In the past six weeks, both the non-seasonally adjusted number (red), and the less important seasonally adjusted number (blue) have both remained essentially stationary. This week the former rose by 266,400 to 17.921 million, still 4.873 million below its peak of 22.794 million six weeks ago; while the latter rose by 59,000 to 19.290 million, 5.622 million below its peak of 24.912 million reading six weeks ago:

In other words, the spreading new damage shown by the continued huge numbers of new jobless claims is about equal to the callbacks to work from various sectors “reopening.”

The stalled progress of both new and continued claims is apparent in the graph below, showing the percent change week over week in new (blue) and continued (red) claims:

For the last three weeks in initial claims, and the last six in continuing claims, on a percentage basis there has been little change.

Finally, it is interesting to compare this with the payrolls numbers, including yesterday’s jobs report, which currently shows a loss of 14.661 million jobs from peak. This is less than the number of continuing claims alone, which strongly suggests that the jobs report is underestimating the damage done to the jobs market by the pandemic, as shown in the graph below:

Since claims are actual counts by the States vs. a sampled estimate in the jobs report, I am inclined to factor the former.

We’ll get a better look on Tuesday, when we get the JOLTS report, which shows both the  hiring and discharges sides of the jobs ledger. Since this will be for May, the first month of job gains after the pandemic started, it will better show us how much rehiring has been occurring.