Coronavirus dashboard for June 17: the second wave of the tsunami comes ashore

As of yesterday, there were 2,137,731 total documented coronavirus infections in the US. Total known deaths were 116,963.

As I have stated several times in the past month, I believe that coronavirus infections and deaths will wax and wane around the April-May plateau of roughly 20-25,000 new daily infections and 500-2000 daily deaths, at least as long as Trump remains President. This is because, absent competent Federal leadership, the US lacks the political and social will to do what is necessary - distancing + mask-wearing + tracing - in order to “crush the curve” as almost every other industrialized European and Asian country has been able to do.

The current situation in the US is divided by region. In the early hard-hit areas of the Northeast and Midwest, effective measures were put in place and have been relaxed more gradually. As a result the infection rates there have continued to decline. By contrast, in the Confederacy, the High Plains, and the Southwest, lockdowns were put in place late if at all, and lifted early without any meaningful restrictions. As a result infection rates have begun to rise, in a few States at an exponential rate.

Yesterday the COVID Tracking Project finally released graphs for each region per capita, shown below: 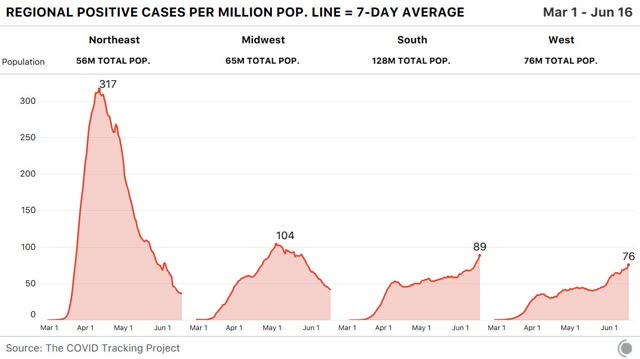 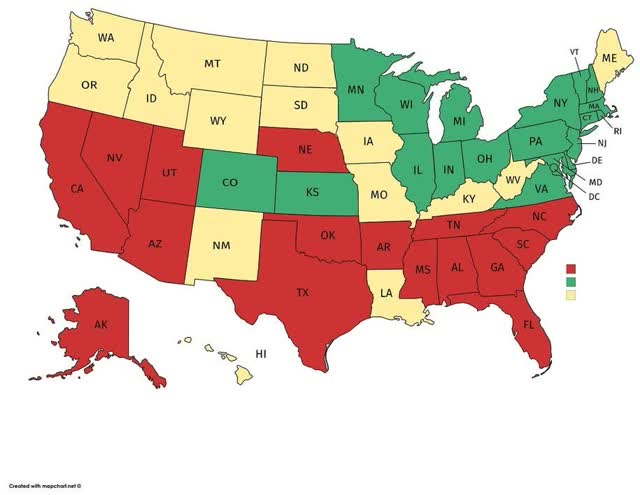 The regional pattern is obvious.

Here are the thumbnail graphs of all States with recent increases in new infections, ranked in order from highest to lowest number of *total* infections over time:

The last half dozen States shown, including, e.g., Oregon, Montana, Alaska, and Hawaii, have such small total numbers that the recent increases aren’t really significant; whereas the first shown, Texas, isn’t even in the “top 10” for the per capita rate of new infections (it’s #17. California is #14)).

The “leader of the pack” among the recklessly reopened States is Arizona, which saw a huge increase in new cases yesterday, bringing its 7 day average up to 214 per million: 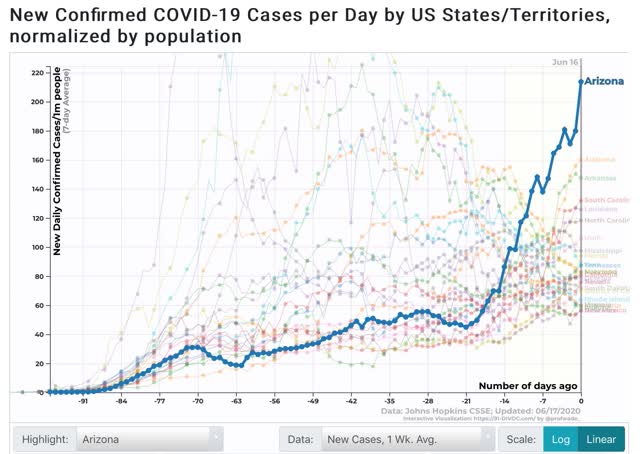 To put this in perspective, here is the same graph but superimposing NY’s trend-line: 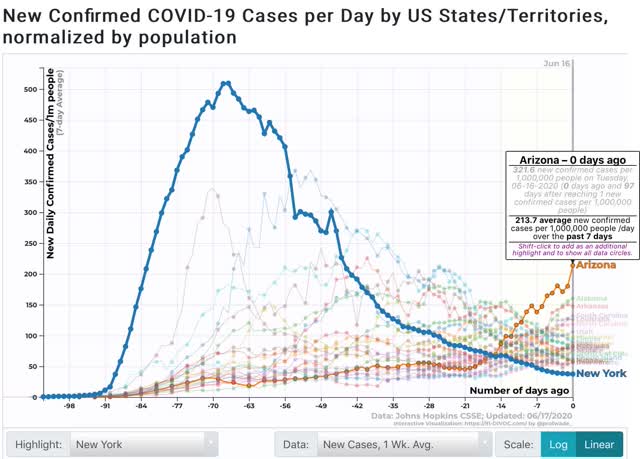 Even now, Arizona is not nearly as bad as NY, NJ, CT, or LA were at their peaks. But at its current rate of doubling, roughly every 9 days, if this continues I n about 2 weeks AZ will be as bad as NY was at its worst.