Initial jobless claims still a positive; what I’ll be watching for tomorrow

As I’ve said a number of times over the past few months, the lack of an increase in initial jobless claims is the best argument against any oncoming recession. If businesses aren’t laying employees off, those same people are consumers who are going to continue to spend, which is 70% of the total economy.

This morning’s initial jobless claims report continues the streak. At 203,000, it is the lowest since April. Averaging it with last week, due to the change in Thanksgiving this year gives us 215,000 for the two weeks - right in line with the average for over the past year.

Even the less leading but less volatile 4 week average of continuing claims is only +0.4% higher than one year ago, well below my +5% YoY threshold for concern:

Tomorrow I will also again be particularly interested in manufacturing, residential construction, and temporary employment, the markers for all of which indicated contraction in the past month. Here is the update on temporary jobs from the American Staffing Association: 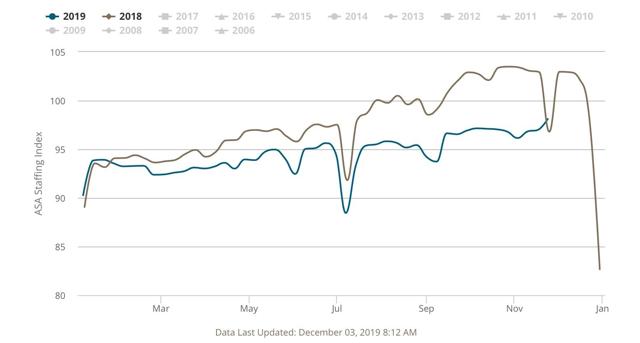 The pattern has been that the initial estimate for all has been positive, with substantial downward revisions in both temporary jobs and manufacturing. So I will be paying extra attention to the revisions in these, and to the goods producing sector in general, tomorrow.