As I’ve noted a few times recently, I’m paying additional attention to the weekly jobless claims numbers, partly because I suspected that the late Easter this year resulted in some residual seasonality (which I think has been demonstrated), and partly because if my slowdown forecast is correct, it ought to start showing up there.

The initial claims report this morning covered the week during which the BLS surveyed employers for the May jobs report coming out in two weeks. In the four weeks that coincided with the April report, initial claims made new 49 year lows, averaging 201,500. In the past five weeks that will coincide with the May report, the average has been 221,500.

So, while this isn’t precisely on point, here’s a graph of the four week moving average of claims (blue, left scale) vs. the unemployment rate (red, right scale):

I don’t think it was a coincidence that the unemployment rate fell to a 50 year low during the four week period that initial claims made 49 year lows. And I strongly suspect that the June report will take that back, with an unemployment rate of 3.8% +/-0.1%.

If that happens, it will be significant, because a 3.8% unemployment rate would be exactly what the rate was 12 months previously. And a YoY unemployment rate that has not improved has only happened once during this expansion (September 2016, right before the election).

Further, at the moment initial claims are higher YoY:

Bottom line: unless jobless claims continue to fall in the weeks ahead, they are consistent with a slowdown.

And while I’m at it, another leading sector - temporary jobs - continues to show weakness as reported in the weekly American Staffing Association’s Index: 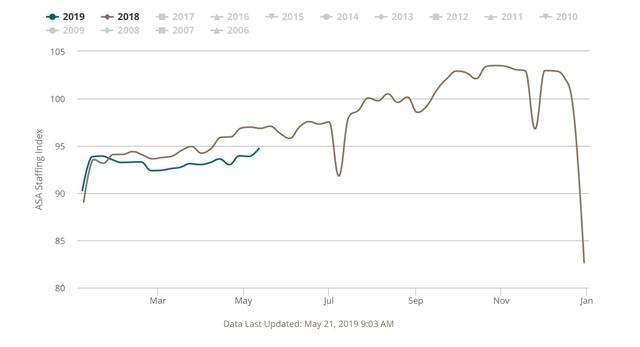 I was surprised by the strong +12,000 temporary jobs number in the April jobs report. I am expecting either that to get revised downward, or a poorer comparison when May’s report comes out, or both.

In short, the weekly data so far this month is consistent with an oncoming slowdown in employment gains. We’ll see in two weeks.