On Sunday I said, “Construction spending ... should follow housing permits and starts with a delay of several months. But, oddly, even though starts in particular have continued to languish, spending has come back strongly since last November. I’ll be looking to see if that anomaly continues, or whether construction spending reverts to its historical pattern.” I also wrote that “The Fed regional indexes have turned up in the last couple of months, so I am expecting [ISM manufacturing] to improve as well.”

Let’s take these in turn.

As of March, it hadn’t yet.

Turning to the ISM manufacturing report, it declined to 52.8, the lowest since October 2016. New orders fell to 51.7, the lowest level this year so far: 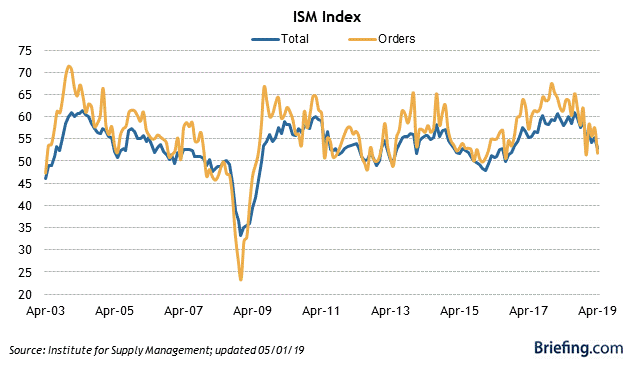 Employment also declined to 52.4, just above its recent low of 52.3 two months ago.

This is expansion, but not much.

By the way, yesterday the Staffing Index of the ASA for temporary jobs fell to -2.1% YoY: 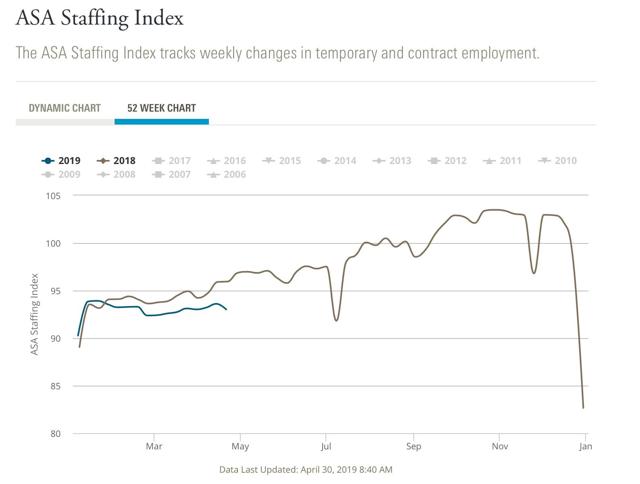 While this isn’t at “Great Recession” levels or even that of the 2015-16 downturn yet, it does suggest further weakness in that leading area.

All of which suggests that in Friday’s employment report, the three leading sectors of temporary, manufacturing, and construction jobs ought to continue to decelerate or decline.
Posted by New Deal democrat at 10:00:00 AM