A couple of nuggets of good economic news


Sometimes there is almost no economic news at all. This isn’t one of those times.

Because there have been increasingly ominous signs among the long leading indicators, that have been spilling over into the short leading indicators, suddenly there are a lot of signs and portents to look at. A lot less about jobs and wages that I keep exclusively here.
So, once again I got waylaid preparing a long piece for Seeking Alpha, on how the Fed may need to *cut* rates quickly in order to avoid a recession, that may not get posted until tomorrow.
In the meantime, here are a couple of graphs to give you something to chew on.
First, I’ve noted in the last few months how wages for ordinary workers have started to take off. A few people have pointed out that it may be less due to overall tightness in the labor market and more due to statutory minimum wage increases.
It looks like they’ve got a good point. Here’s a graph of wage growth for low wage workers in states that have raised the minimum wage vs. those that have not: 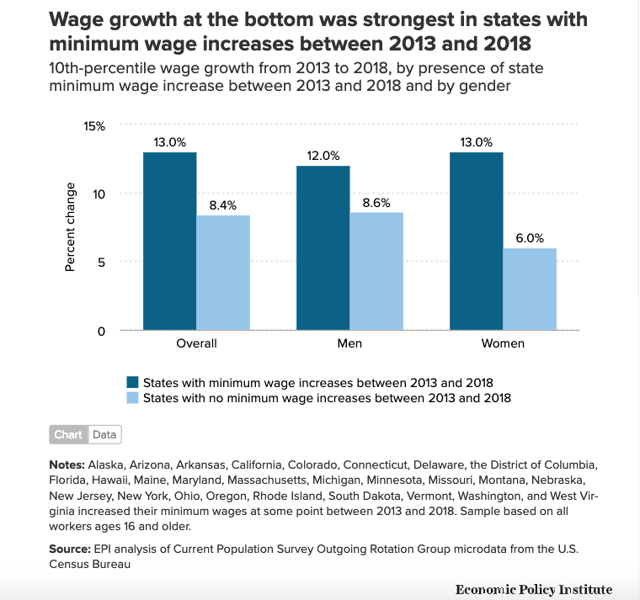 Pretty self-explanatory.
Second, recently the number of initial jobless claims has risen somewhat. The good news is, that number has backed off from the spike that occurred during the government shutdown:

The four week moving average of initial claims, at 225,000, is only about 9% above its low point 6 months ago. That does show some weakness, but not enough to warrant even a yellow caution flag at this point.
Posted by New Deal democrat at 9:13:00 AM