Regular economic blogging will resume later today.  In the meantime . . .

As I may possibly have mentioned once or twice before, I am a total nerd.  One of the web sites I watch is NSIDC's site tracking arctic sea ice.  To be honest, I'm a little surprised that it is still functioning, since the Trump Administration believes that climate change is just a Chinese hoax, so I thought they would take it down almost immediately after coming into office.  Guess they haven't found it yet!

Anyway, if climate change is just a Chinese hoax, they sure are going to extremes to perpetrate it.  Because arctic sea ice hit its 2018 minimum on September 23.  Here's what it looked like on that date: 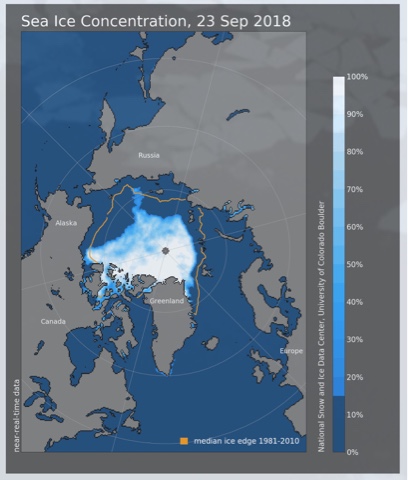 All that was left was a rectangular shaped piece in the middle of the ocean into the Canadian archipelago, and a narrow salient reaching towards eastern Siberia. While the "Northwest passage" on the American side never quite opened up this year, the "North sea" route on the Asian side was open for several months. This was tied for the sixth lowest minimum sea ice extent in the last 40 years.

Perhaps more interesting is how this year's minimum compared with prior years, as shown on the graph below: 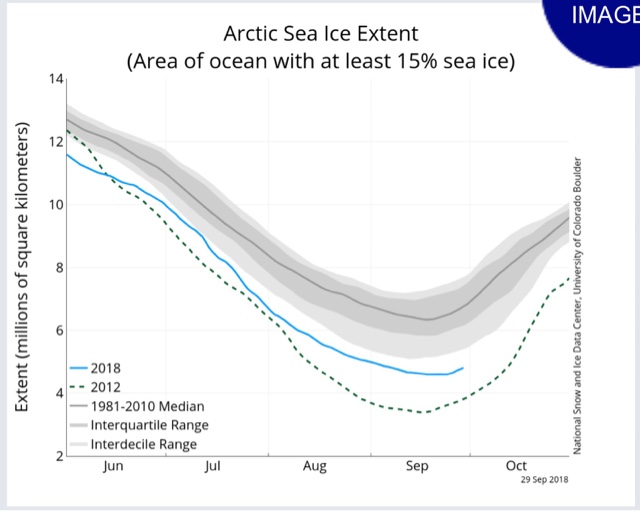 Not only did the amount of sea ice remain in the bottom 10% of all seasons in the last 38 years -- in fact, while not shown, it was in that bottom 10% all last autumn and winter as well, i.e., for the entire year -- but note on the graph the time during September that sea ice has reached its minimum previously.  At all levels the minimum was reached earlier in September than it was this year.

The NSIDC confirmed this in its report on the minimum, saying:

It makes sense that, if the arctic is warming, sea ice would reach its minimum later and its winter maximum earlier., since average temperatures above freezing would be the case for more of the year.

Man, those Chinese hoaxers sure are going to massive extremes to create fake evidence!