A hypothesis for Prof. Krugman: the transmission method was FEAR


In his recent column disagreeing with Ben Bernanke, Paul Krugman asks for an explanation as to how a financial panic could lead to years thereafter of a slow recovery. Specifically, Krugman says that he "really really wants to hear about the transmission mechanism."

After all, the financial panic eased in 2009. And yet, outside of the very noteworthy exceptions of corporate profits generally and Wall Street bank profits specifically, the economic recovery was lethargic.

Now, to a great extent, the debate between "credit event" and "housing event" is somewhat a semantic one.  You simply don't get a housing bubble unless there is a credit bubble to enable it. Similarly, absent a credit bubble in consumer lending for either housing (the 2000s) or appliances and furniture (the 1920s), you don't get a big consumer downturn (see, e.g., 2001, in which consumers sailed right through a brief and shallow recession brought on in large part by a stock market bubble. See also the quick late 1980s recovery from the 1987 stock market crash).

But if you are looking for a transmission mechanism that lasted after 2009, as usual you have to look beyond narrow-minded neoclassical economy orthodoxy. Because from a behavioral point of view, the answer looks pretty simple: FEAR.

Behavioral economists have shown that people in general react twice as strongly to the fear of a loss vs. the anticipation of an equivalent gain. A good example in the everyday economy is that consumers cut back spending twice as sharply in the face of an oil price spike, as they loosen their spending in the face of a steep decline in gas prices.

It is crystal clear that the financial panic of September 2008 instilled fear in the vast mass of households. I believe that there is very good evidence that it persisted for most of this decade.

To begin with, here is a graph of consumer confidence as measured by the University of Michigan: 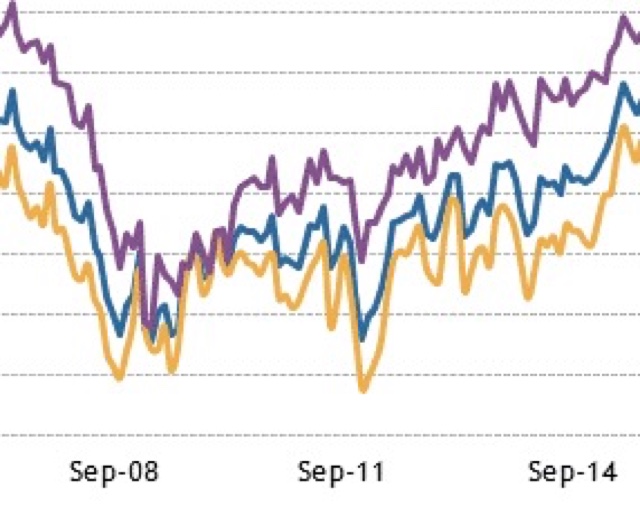 I have zoomed in on 2007-2015, because i want to emphasize that consumer confidence did not rebound meaningfully at all once it crashed in 2008, until about 2014. Furthermore, any time there was a whiff of renewed crisis during that timeframe, confidence plummeted, in the case of the 2011 "debt ceiling debacle," all the way back to its bottom, but also in response to the Deepwater Horizon massive oil spill (2010), the "fiscal cliff" (end of 2012) and the GOP's government shutdown (2013).

That, ladies and gentlemen, is fear.

and they haven't meaningfully increased their exposure to debt since.

Further, there was a housing boom from 1986-88 without a credit bubble. Afterward house prices declined 10% into the early 1990s:

But the below graph of the personal savings rate shows that, unlike the 1990s, when the household savings rate went into a sustained decline, as household debt levels increased (see first graph above), following the great recession, the savings rate maintained its higher level, with the exception of 2012-13 when a one year 2% rebate of Social Security withholding taxes that resulted in higher spending, which resulted in a one year decline in saving when it expired:

So, I believe a good case can be made that the "transmission mechanism" that Krugman seeks is that the trauma of the 2008 financial crisis instilled a continuing sense of fear in consumers that there might be a repeat, leading to a shunning of debt and a resulting more subdued increase in the consumption that is 70% of the U.S. economy.
Posted by New Deal democrat at 10:30:00 AM