Is the rental vacancy rate a leading signal for the housing market?

Here is something I noticed while putting together my piece yesterday on the housing market.

That made me go back and think about an anomaly I had noticed, but hadn't figured out, with regard to the rental vacancy rate: 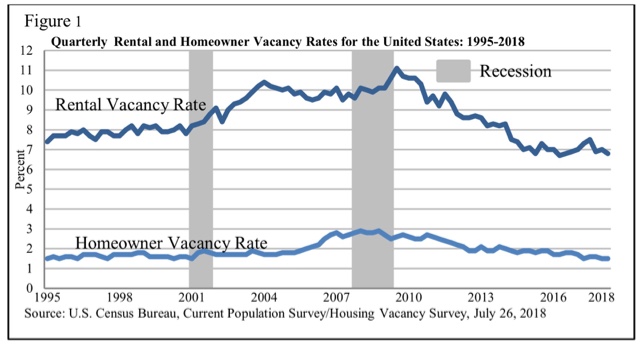 which, according to the graph, peaked in the 3rd Quarter of last year, and has declined since.

It occurred to me that this is probably not a coincidence. If housing unaffordability has become a real constraint for potential buyers, then there should be an increasing number of such buyers who are forced to rent instead -- which would drive down the rental vacancy rate.

It also looks like the rental vacancy rate peaked in 1997-98 and early 2004, in advance of the last two cyclical housing peaks, which I suspect is also not a coincidence.

So, is there a leading signal for the housing market in the rental vacancy rate? My preliminary perusal makes me think it's complicated. I'm chewing it over.
Posted by New Deal democrat at 8:15:00 AM