How "replacement hiring" helps enforce the taboo against raising wages

Every month when the JOLTS report comes out, I rail against "job openings" as some sort of hard data, and in particular the notion that the US is at "full employment" because the number of "openings" exceeds the number of "unemployed" in the monthly jobs report.

For example, here's a graph I ran last week, which strongly suggests that there has been a taboo against hiring at market-clearing higher wages, leading to an increase in quits to find better-paying jobs:

"Job openings" may be firms holding out for the candidate who will accept the job at the rate they want to pay, and/or keeping the listing open just to troll for resumes.

Well, it turns out it's worse than that.

Sushant Acharya and Shu Lin Wee of the New York Fed issued a report last week in June entitled "Replacement Hiring and the Productivity-Wage Gap." (pdf) in which they

What is a "replacement hire"?  It's a hire that is not for a new position (per the Census Bureau), or in other words, to replace a currently occupied position. It could be in anticipation of worker(s) quitting, or it can also be trolling for "better" workers, in which existing workers will be fired.

Acharya and Wee found that "replacement hiring" increased by over 5% from previous levels in the 2000s expansion, and over 15% in the current one: 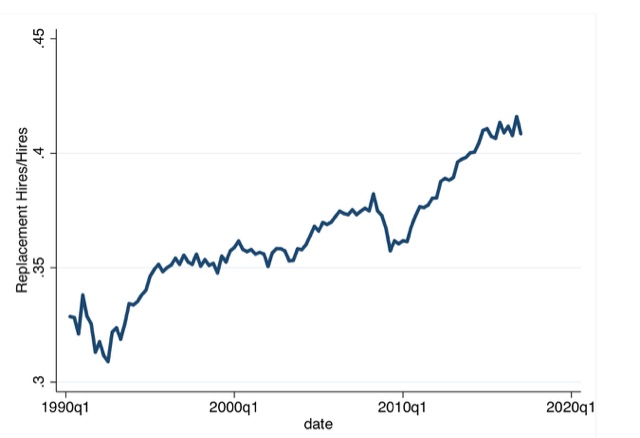 In fact, "replacement hiring" has exceeded 1990s levels during the entirety of this expansion, all the way back to 2009 when there was over 10% unemployment!

Further, it is clear that companies are using "replacement hiring" as a means to decrease wage demands from their current workforce. Acharya and Wee calculated the ratio of "voluntary quits" to "hires" from the JOLTS data, and compared that with the above graph on "replacement hiring:" 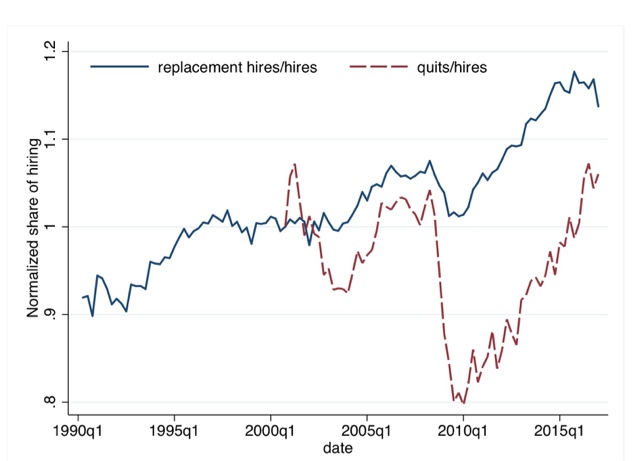 Only in the past several years has the ratio of quits to hires increased to the level it was at during the very robust 1990s expansion. But, even though it has narrowed, the level of "replacement hiring" exceeds the level of quits.  In other words, the gap represents the "job openings" that firms have been using to search for new workers to displace existing workers,

And what is the result? From their Conclusion:

[A] larger replacement hiring share, the higher market power of firms, larger job insecurity faced by workers, and lower measured matching efficiency in the labor market allow firms to reap productivity gains from replacing workers while still keeping wages low. Compared to the efficient benchmark, private agents in the decentralized economy do not internalize the rat race externality and tend to create too many low productivity jobs. This in turn raises the incidence of replacement hiring and widens the gap between productivity and wages.

In plain english, companies who are constantly holding the threat over current employees' heads that the firm has an ongoing quest to replace them, are companies whose workers don't demand increased wages.