How close are we to full employment? One method that is sometimes touted is the Beveridge curve.  The Beveridge curve (invented by a British economist named, you guessed it, Beveridge, compares the level of job openings with the level of unemployment. Generally speaking, if there are as many job openings as there are unemployed, then the economy is running at full employment (since everyone who wants a job ought to be able to get one).

As we saw last week, job openings as measured by the JOLTS report are at an all-time high.  This gives us a Beveridge curve that suggests that the US is close to full employment: 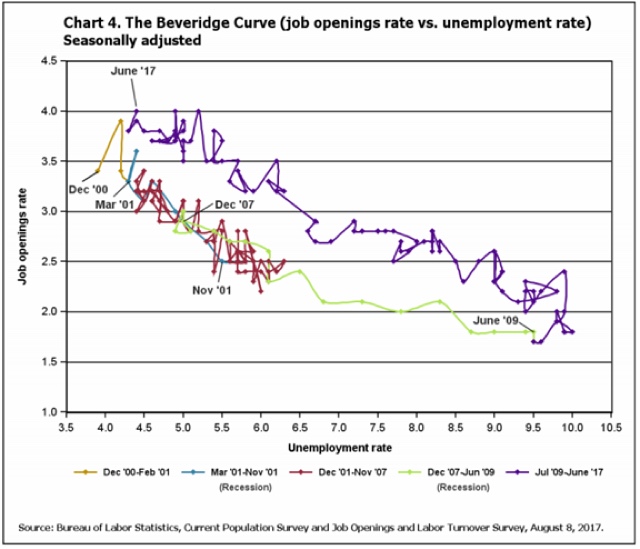 The unemployment rate, at 4.3%, is only 0.3% above the job openings rate, at 4.0%. Of course, another way to look at the data is that it has taken many more job openings to get us down to 4.3%, compared with the last expansion at least.

But as I have frequently noted, this assumes that job openings are offered in good faith.  If employers are just trolling for resumes, or laying the groundwork for H1-B slave labor visas, then job openings aren't offered in good faith.  I think we have to measure employers not by their words (advertising openings), but by their deeds (actual hires).

Note that at the end of the late 1990s boom, we really were at full employment. The ratio of both openings and hires to the unemployment rate was close to  1:1. Pretty much everyone who wanted a job could be matched with one. The 2000s economy never got to that point. While the current economy looks like it is at full employment measured by openings, measured by actual hires there is still slack, as there are only 8.5 hires for every 10 people who are unemployed.

For completeness' sake, I did the same thing with the U6 underemployment rate. Here's what that shows:

Needless to say, I think the most reliable measure is based on deeds rather than words, and measured by deeds, we aren't at full employment, let alone a boom.
Posted by New Deal democrat at 9:30:00 AM