US Equity and Economic Week in Review: The Economy Rebounds from Recent Data Softness

Unlike several weeks over the last few months where pieces of the economic releases were moderately weaker, this week’s news was solid.  Second quarter GDP rebounded from its weak first quarter pace, the housing market remains in good shape and durable goods orders increased (although transportation orders had a great deal to do with this number).  As for the markets, second quarter earnings season is well underway and results have been positive.  The markets have reacted accordingly moving modestly higher.  As has been the case however for the last 24 months, the market remains expensive meaning upward movement is constrained by the combination of high PE ratios and revenue growth.

On Friday, the BEA released their first estimate of second quarter GDP, which grew at a 2.6% annual rate.  This was a marked improvement from the 1.2% annual growth rate of the first quarter.  Personal consumption expenditures (PCE’s) provided a noticeable boost: after increasing a paltry 1.9% in the first quarter, they rose a far more robust 2.8% in the second.  A big reason was the turnaround in durable goods purchases which grew 6.3% in the second quarter compared to a slight contraction in the first.  Investment only increased 2%, thanks to a 6.8% decline in residential spending.  But nonresidential structural investment also fell from its first quarter reading of 14.8% to 4.9%.  Intellectual property investment was only up 1.4%.  But whatever the weakness of certain internal components, the 2.6% growth rate and a welcome change from yet another weak first quarter GDP reading.

This week, we had reports on both new and existing home sales.  Let’s first look at new home sales:

These were up 0.8% M/M and 9.1% Y/Y (left chart).  This market has been in a solid uptrend since the summer of 2014.  New home builders clearly learned their lesson from the bubble; for the last four years, they have maintained a steady inventory relative to demand.  (right chart).

Next, let’s look at existing home sales, which are by far the larger market:

Sales were down 1.8% M/M and up 0.7% Y/Y (left chart).  Sales have been between 5.5 million and 5.7 million units/year for the last year.  Part of the reason for the slowing sales pace is the constrained inventory situation (right chart).  Inventories relative to sales have been trending lower for the last four years.

Durable goods orders increased 6.5%. But the devil is really in the report’s details:

The top two graphs show total new durable goods orders (the absolute number is on the left; the Y/Y number is on the right).  The overall number could finally be moving through the $240 million dollar level that has contained this release for the last two years.  But the middle chart shows that core goods decreased slightly.  This sub-index – which is a barometer of business demand – is still fairly weak and today’ release did nothing to dispel that characterization.  The bottom chart illustrates that transportation orders are the primary reason for the increase.  This headline number will likely decrease in the next few months, bringing it back within the $220-$240 million-dollar range.

Economic conclusion: this week’s news was very encouraging.  GDP rebounded to 2.6% largely thanks to an uptick in consumer activity.  Housing is growing modestly and durable goods orders ticked higher.  As of now, we’re on track for better growth in the third quarter.

Market overview: earning season is well underway and results are positive. According to Factset.com, revenues are up 5.2% and earnings have risen 9.1%.  The same numbers for Zacks are 3.4% and 8.8%.  These results are fortunate because the market is expensive: the current and forward PE ratios for the SPYs and QQQs are 23.94/25.75 and 18.94/21.45, respectively.  Also remember that corporate profits are an important long leading indicator; these results point to continued growth in the next 6 to 12 months.

This week’s market’s results highlight why I dislike the Dow.  While it was up 1.16% -- largely thanks to the disproportionate influence of several key stocks -- broader averages rose far more modestly.  The SPYs were up .01%, while the QQQs fell .19%; the IWMs were the big loser, dropping .59%.

We are long past the easy money phase of this market.  Instead, investors should be content with modest gains: 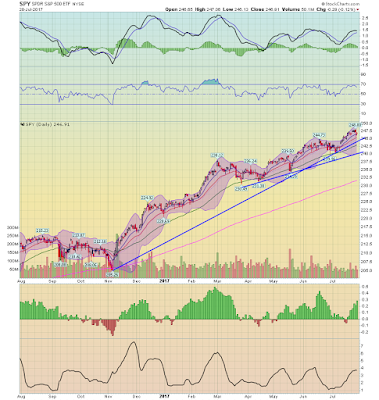 The S&P 500 rallied strongly after the election.  Over a four-month period, the SPYs rose from a low of 205.26 to 238.12.  But since then, the index has been grinding higher in a “two steps forward one step back” manner.  This shouldn’t be surprising.  The post-election rally was fueled by the hope a unified Republican government would deliver lower taxes, regulatory reform, and more fiscal spending.  The market is slowly absorbing the bitter pill that this probably won’t happen as advertised.  But the economic environment is perhaps more important than the political, and that points to modest growth and -- thanks to a weaker dollar -- stronger exports.
Posted by Unknown at 9:31:00 AM