Last week, I discussed the views of 4 Federal Reserve presidents to discern their current interest rate policy.  This week’s column finishes that analysis.  I would like to offer a personal thanks to Minneapolis Federal Reserve president Neel Kashkari who responded to a Twitter question and pointed me to his latest essay on his policy stance.  Not only did it make my weekend, but in showed what a wonderfully powerful tool social media could be.

In an online essay, Dallas Fed President Kaplan described a fairly healthy economy.  He sees a de-leveraged consumer was the primary driver of GDP growth.  He projects a slight increase in non-residential fixed investment.  Regarding the Fed’s goals, he noted that the U-6 unemployment rate was near its pre-recession low, indicating the labor market is near full employment.

And the Dallas Fed’s trimmed mean PCE is just below the Fed’s 2% target:

Based on these considerations, I have argued that future removals of accommodation should be done in a gradual and patient manner. In that regard, I continue to believe that three rate increases for 2017, including the March increase, is an appropriate baseline case for the near-term path of the federal funds rate.

Chicago Fed President Evans also believes the economy is near the Fed’s unemployment and inflation targets.  Consumer spending has been strong thanks to healthy balance sheets and strong job growth.  Business investment has been weak, but the strong dollar has lowered international demand (and therefore the need for domestic investment) while weaker oil prices have hampered the oil industry.  He also made a very interesting point: because we’re in a slower growth environment, the pace of rate hikes will be slower.  Put another way, slow growth means weaker prices pressures which implies a weaker pace of rate increases.  Here is his statement on the pace of rate increases:n

I think the progress made toward the FOMC’s dual mandate goals justifies our recent rate increases, and my current outlook envisions the fed funds rate moving up over the next few years along a path roughly consistent with the median FOMC projection.

Philadelphia Fed President Harker sees three rate hikes this year.  He sees the following labor market situation: “The unemployment rate has dropped to its lowest point in a decade, quits are up, and we’re starting to see upward pressure on wages. I estimate 2.5 to 3 percent wage growth this year, which is good. It’s what has been missing from this recovery.”  He also believes inflation is already near the Fed’s target.  Here is his statement on monetary policy:

First and foremost, based on the strong economic outlook, I continue to see three rate hikes for 2017 as appropriate. That, as ever, is assuming that things unfold in line with my projections.

NY Fed President is also on the record for 2 more rate hikes:

The Fed has penciled in two more rate hikes this year and Fischer said Friday this remains his forecast.

“So far, I haven’t seen anything to change that,” he said.

He stressed the Fed is “not tied” to a total of three rate hikes this year and the actual pace of tightening depends on the data.

The lone dissenter from recent rate hike talks is Neel Kashkari of the Minneapolis Fed. He offered his reasoning in a recent essay.  First of all, he notes that most Fed governors are treating the 2% inflation target as a ceiling rather and the median estimate of prices.  He offered the following analogy:

For example, if you are driving down the highway alongside a cliff, you will err by steering away from the cliff, because even one error in the other direction will cause you to fly over the cliff. In a monetary policy context, I believe the FOMC is doing the same thing: Based on our actions rather than our words, we are treating 2 percent as a ceiling rather than a target. I am not necessarily opposed to having an inflation ceiling. The European Central Bank has a 2 percent ceiling instead of a symmetric target. However, I am opposed to stating we have a target but then behaving as though it were a ceiling.

This is a very important point, which I believe to be largely correct.  He also noted that other inflation measures – specifically expectations and labor costs -- are also contained.  And unlike other Fed governors, he believe there is sufficient labor market slack to warrant maintaining the current rate policy.  Here, he cites the employment to population’s ratio as evidence: 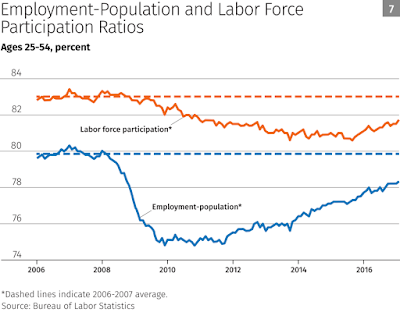 He also references the still high U-6 rate for support (however, see Dallas President Kaplan’s analysis above).  Overall, I would expect Kashkari to continue being the lone dissenter.

A large majority of Fed governors are in the hawkish camp now.  Unless there is a fundamental change in the economy, expect at least 2 more rate hikes this year.
Posted by Unknown at 12:03:00 PM