Dear Jazz: The First Thing to Do When You're Digging a Hole ... 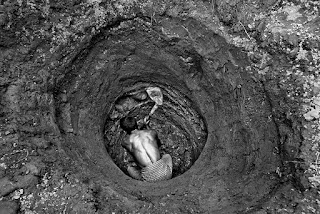 The above picture is Jazz Shaw, who continually makes the argument that raising the minimum wage will cost jobs.

Mr. Shaw believes that a recent report published by the Harvard Business Review supports his conclusion.  As I wrote, it doesn't (see here and here).  But, being that Mr. Shaw is, well, dumber than a post, he'll keep making the argument.  So, here's a key excerpt from a report that he claims supports his position

Our results contribute to the existing literature in several ways. First, our findings relate to a large literature seeking to estimate the impact of the minimum wage, most of which has focused on identifying employment effects. While some studies find no detrimental effects on employment (Card and Krueger 1994, 1998; Dube, Lester & Reich, 2010), others show that higher minimum wage reduces employment, especially among low-skilled workers (see Neumark & Wascher, 2007 for a review). However, even studies that identify negative impacts find fairly modest effects overall, suggesting that firms adjust to higher labor costs in other ways. For example, several studies have documented price increases as a response to the minimum wage hikes (Aaronson, 2001; Aaronson, French, & MacDonald, 2008; Allegretto & Reich, 2016). Horton (2017) find that firms reduce employment at the intensive margin rather than on the extensive margin, choosing to cut employees hours rather than counts. Draca et al. (2011) document lower profitability among firms for which the minimum wage may be more binding

Put more directly: the report that Mr. Shaw says supports his position in fact doesn't.  The data -- as noted above -- says the opposite.

Now, does this matter to Shaw or the editors at Hot Air?  No.  They, in fact, could care less.  They just know in their bones that they're right, so that's it.  The above citation from the report -- which contradicts Hot Air's "analysis" -- is meaningless academic drivel written by liberal economists who are secretly in league ....  you get the idea.