[Note: I'm still way too busy i.r.l.  So this is a tardy update on some news released last week.]

I reamin unimpressed with the Job Openings and Labor Turnover Survey (JOLTS), as I have been for for over a year, and like many others I have found the Labor Market Conditions Index a source of concern.

First, the LMCI, with the exception of one month ago, has been relentlessly negative all this year:

At the same time, in the past it has almost always taken an LMCI reading of -10 or worse to be consistent with a recession.  So the LMCI is just telling us that the labor market continues to decelerate.

The JOLTs report, which was updated for July, also shows continued deceleration.  For over a year I have noted that the pattern was similar to that in late in the last expansion, and the July report was more of the same.

First, here is a comparison of job openings (blue), hires (green), and quits (red).  Because there is only one compete past business cycle for comparison, lots of caution is required. But in that cycle, hires and quits peaked first and then openings continued to rise before turning down in the months just prior to the onset of the Great Recession:

Through July, 2016 continues to look very much like 2006, or even early 2007.   Although I won't post it this month, in the past I have pointed out that quits in particular seems to correlate well with the unemployment rate a few months later -- and since quits has gone nearly flat, I expect the unemployment rate to remain essentially steady.

Finally, I wanted to repost this self-explanatory graph from Barry Ritholtz: 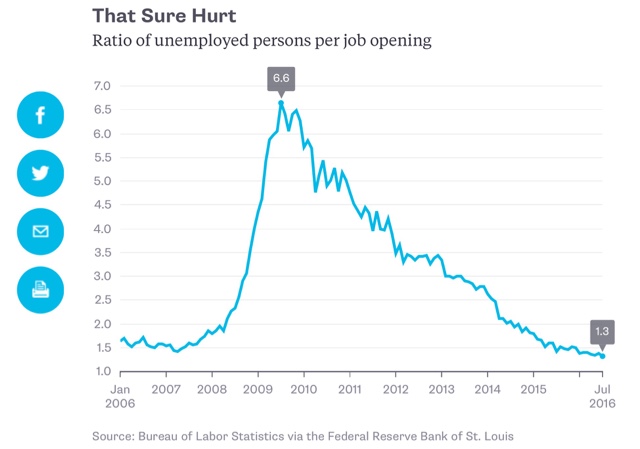 This tells us that the ratio is about as it was at the peak of the last buisness cycle.  Which means that employers with job openings have a choice:  either pay better wages, or see the openings go unfilled.  Needlless to say, I am rooting for better wages.
Posted by New Deal democrat at 11:56:00 AM