Second, and related, although we have seen important progress on employment, this improvement has been accompanied by evidence of greater slack than previously anticipated. This uncertainty about the true state of the economy suggests we should be open to the possibility of material further progress in the labor market. Indeed, with payroll employment growth averaging 180,000 per month this year, many observers would have expected the unemployment rate to drop noticeably rather than moving sideways, as it has done. It is true that today's unemployment rate of 4.9 percent is only 0.1 percentage point from the median SEP participant's estimate of the longer-run level of unemployment. However, the natural rate of unemployment is uncertain and can vary over time. Indeed, in the SEP, the central tendency of the projection for the longer-run natural rate of unemployment has come down significantly, from a range of 5.2 to 6.0 percent in June 2012 to 4.7 to 5.0 percent in June 2016--a reduction of 1/2 to 1 percentage point.5 We cannot rule out that estimates of the natural unemployment rate may move even lower.

In addition, the unemployment rate is not the only gauge of labor market slack, and other measures have been suggesting there is some room to go. The share of employees working part time for economic reasons, for example, has remained noticeably above its pre-crisis level. Of particular significance, the prime-age labor force participation rate, despite improvement this year, remains about 1‑1/2 percentage points below its pre-crisis level, suggesting room for further gains. While it is possible that the current low level of prime-age participation reflects ongoing pre-crisis trends, we cannot rule out that it reflects a lagged and still incomplete response to a very slow recovery in ‎job opportunities and wages.6

This possibility is reinforced by the continued muted recovery in wage growth. Although wage growth has picked up to about a 2-1/2 percent pace in recent quarters, this pace is only modestly above that which prevailed over much of the recovery and well below growth rates seen prior to the financial crisis.7

My main point here is that in the presence of uncertainty and the absence of accelerating inflationary pressures, it would be unwise for policy to foreclose on the possibility of making further gains in the labor market.

The Percent of People Marginally Attached is Still Very High 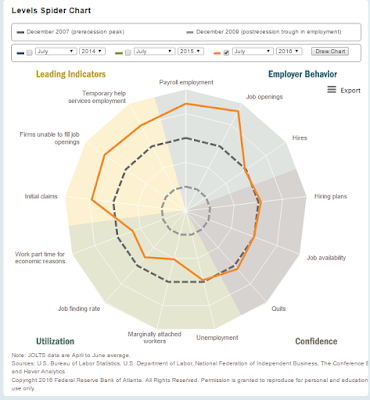 S&P Warns on the UK

While the news is encouraging, we believe it has no bearing on the cloudy longer-term outlook for the U.K. economy… The uncertainty surrounding the U.K’s future outside of the E.U. and the associated economic risks, which we think are pronounced and predominantly skewed to the downside, will gradually take its toll, particularly on investment, as businesses start dealing with the new Brexit reality.

All Three Markit PMIs rebounded sharply in their latest report 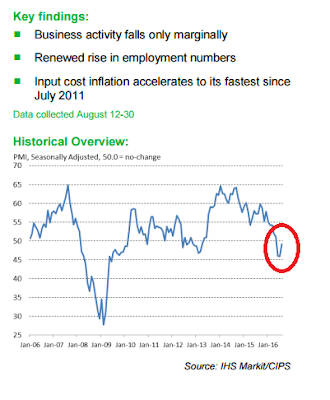 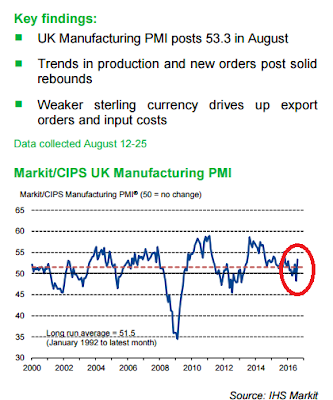 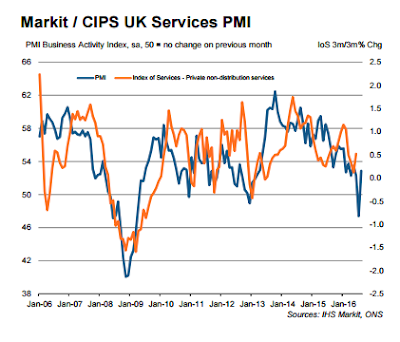