Let me preface this post by noting that unlike the past 6 years, those who believe we are in a recession this year have a reasonable (although I think incorrect) position.  There simply is no doubt that there are a variety of production-related measures that have turned down to an extent that in the past has normally - but not always - indicated a recession. The reason I think they are mistaken is that there are even more consumption-related and financial measures which are at levels that have never been consistent with a recession.

With that out of the way, let me turn to the Doomer graph du jour, which compares Federal withholding taxes paid and state tax receipts: 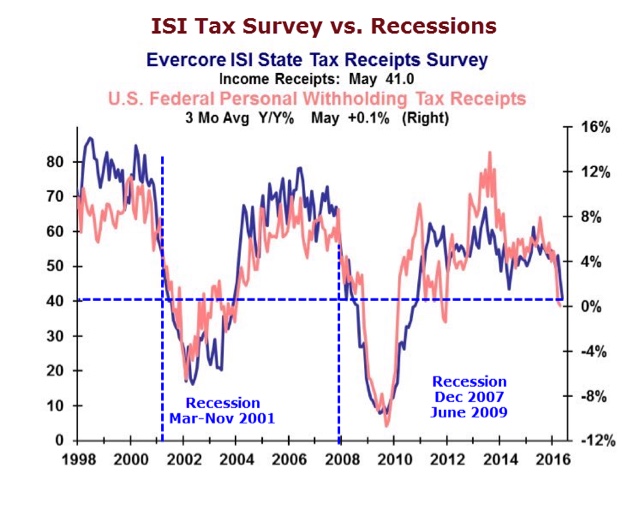 You've probably seen this at a variety of sites in the last few days.

The problem with this graph is that includes two slightly to significantly lagging indicators.  Your employer doesn't start paying withholding taxes until after you are hired.  State tax receipts aren't paid until a month or a quarter after the spending or other taxable event has occurred.  Worse, since both have seasonality, both have to be measured on a YoY basis, which means the turn in the data will come after the actual turn in the economy.

Let's take each of the two measures in turn.  The first measure purports to be of state tax receipts through May.  The source article does not appear to be online, but it is pretty clear that the data is being presented in Quarterly terms.  In fact, it appears to match the Rockefeller Institute's quarterly measure of state tax receipts, below:

I include this because the Rockefeller graph makes clear that the YoY nadir in tax receipts for the last 2 recessions was in Q2 2002 and Q2 2009 -- in the latter case coincident with the end of the recession, and in the former 2 quarters *after* the recession had ended.  In other words, it doesn't tell us anything about where we are headed, only where we have been.  And there is nothing inconsistent with this graph with the shallow industrial recession having ended in the first quarter of this year!  For example, note that the first quarter of 2014 was nearly as bad, and yet the series rebounded thereafter.  And we already knew from Q1 GDP that the first quarter was on the threshold of recessionary, and could even be revised to a negative number.

Now let's turn to Federal income tax withholding.  This isn't difficult to check, since tax withholding is published publicly daily by the Department of the Treasury (I report on in every Saturday).  Here's the YoY% changes in tax withholding for January through March, March through May, and the 2nd quarter through Wednesday (the most recent date available):

The graph is labeled as the 3 month average YoY%.  I simply cannot duplicate the poor result shown in the graph, no matter what 3 month YoY period I use, even adjusting by several measures of wage inflation, since these only varied between 1.8% and 2.6% during this period: 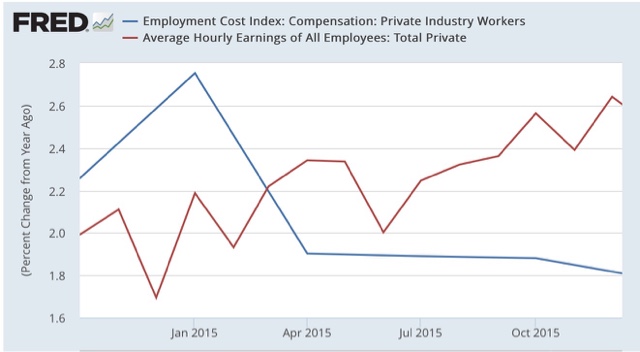