I own this.  This is not a solicitation to buy or sell this security.  Do your own research and come to your own conclusions.

Oil’s recent sell-off provided one of the best buying opportunities in the energy sector since the Lehman crash.  Of course, the next logical question is, “what security?”   I started by looking at the big, multi-national oil companies.  What first attracted me to CVX was its dividend, which is currently yielding a healthy 4%.  On deeper analysis, I believe the dividend is safe, making this a very attractive company, especially at current price levels.


Let’s start by looking at the weekly chart: 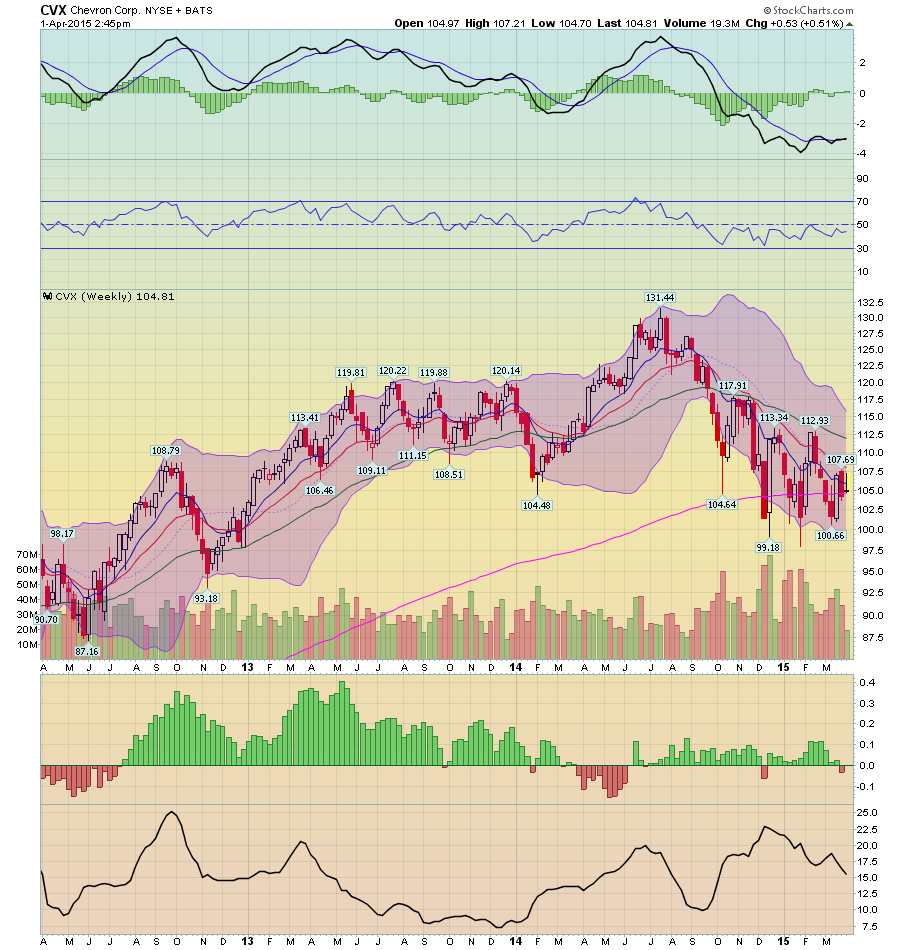 Prices are currently near their lowest level in the last three years and are consolidating around the 200 week EMA.  Momentum is weak but stabilizing and relative strength has upside room.  With a 4% dividend, the shares have built-in price support.  Just going by the chart, CVX is a bargain.


Charts, however, aren’t the whole picture.  Let’s turn to CVX’s valuation by looking at this table from Morningstar: 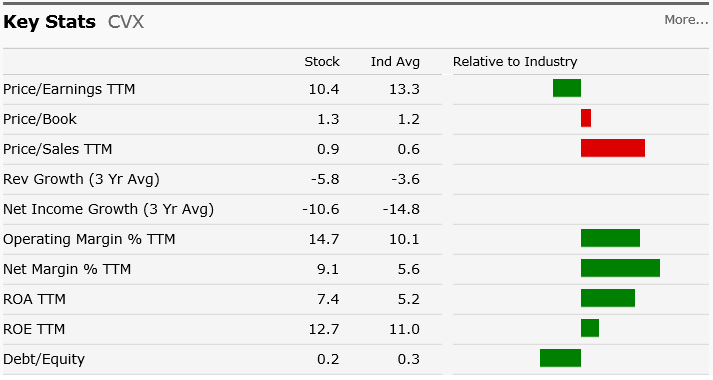 CVX’s P/E is a few points below the industry average which is probably due to its revenue growth being lower than the other major’s.  Nevertheless, the company has better margins, ROA and ROE than its competitors.  Adding to the bullish case is the company has the fourth lowest PE in the industry according to the Finviz.com website.  Adding these factors together, one can arrive at the argument that the stock has at least a few points of upside potential.


Turning to the company’s financials, CVX’s balance sheet demonstrates the company is well managed.  Accounts receivable has decreased from 11.24% of assets in 2010 to the current level of 6.29%.  Inventory levels have been consistently between 2.5% and 3%.  The current ratio is 1.32, giving the company a bit of financial flexibility.  On the other side of the balance sheet, long term debt is only 9% of liabilities.  Value investors should be impressed by the increase in book value, which rose from $105 billion in 2010 to $155 billion in 2014.  Although not bullet proof, CVX’s balance sheet is in good shape.
This is fortunate, because the income statement shows some weakness.  The company’s revenue fell from $254 billion in 2011 to the current level of $211 billion.  Over the same period, the cost of revenue has decreased from 66.2% to 56.4% while operating expenses have increased by the same amount.  The result is net margin has consistently been between 9%-10% for the last five years.  Management has been distributing a large minority of these earnings.  The dividend payout ratio has increased from 30% in 2011 to its current level of 41%.  This is a key reason why the current dividend is safe.  Top line revenue would have to fall by 40% before the payout ratio was challenged.  With a company of this size, a drop of that magnitude is highly unlikely.
Finally we have the cash flow statement.  Free cash flow (operating cash flow – investment expenses) has been positive in all but one year for the last five years.  From 2010-2102, the company added $38 billion in cash before considering investment activity; the only year of decreases saw a drop of $607 million.
To conclude, the company is a bit undervalued.  Its balance sheet is solid, with a well-managed short-term asset position and a reasonable amount of debt.  Although revenue has declined, it would have to drop at least 40% more to threaten the current dividend.  The company has been cash flow positive for the 4 of the last 5 years.  Finally, the 4% dividend gives the stock built-in price support.  At these levels, CVX is buy.