Two articles were posted elsewhere this morning discussing wages and income during this expansion.  Both have misleading aspects to a lesser or greater degree.

The first is an article by Pavlina R. Tcherneva of the Levy Economics Institute.  While I do not disagree with its overall emphasis or conclusion, I do have a significant quibble, because there is one erroneous comparison which can be misleading.

"In the postwar period, with every subsequent expansion, a smaller and smaller share of the gains in income growth have gone to the bottom 90 percent of families. Worse, in the latest expansion, while the economy has grown and average real income has recovered from its 2008 lows, all of the growth has gone to the wealthiest 10 percent of families, and the income of the bottom 90 percent has fallen [through 2013]."


Included in the article is a graph, which is likely to see wide distribution, and which is the problem with this article: 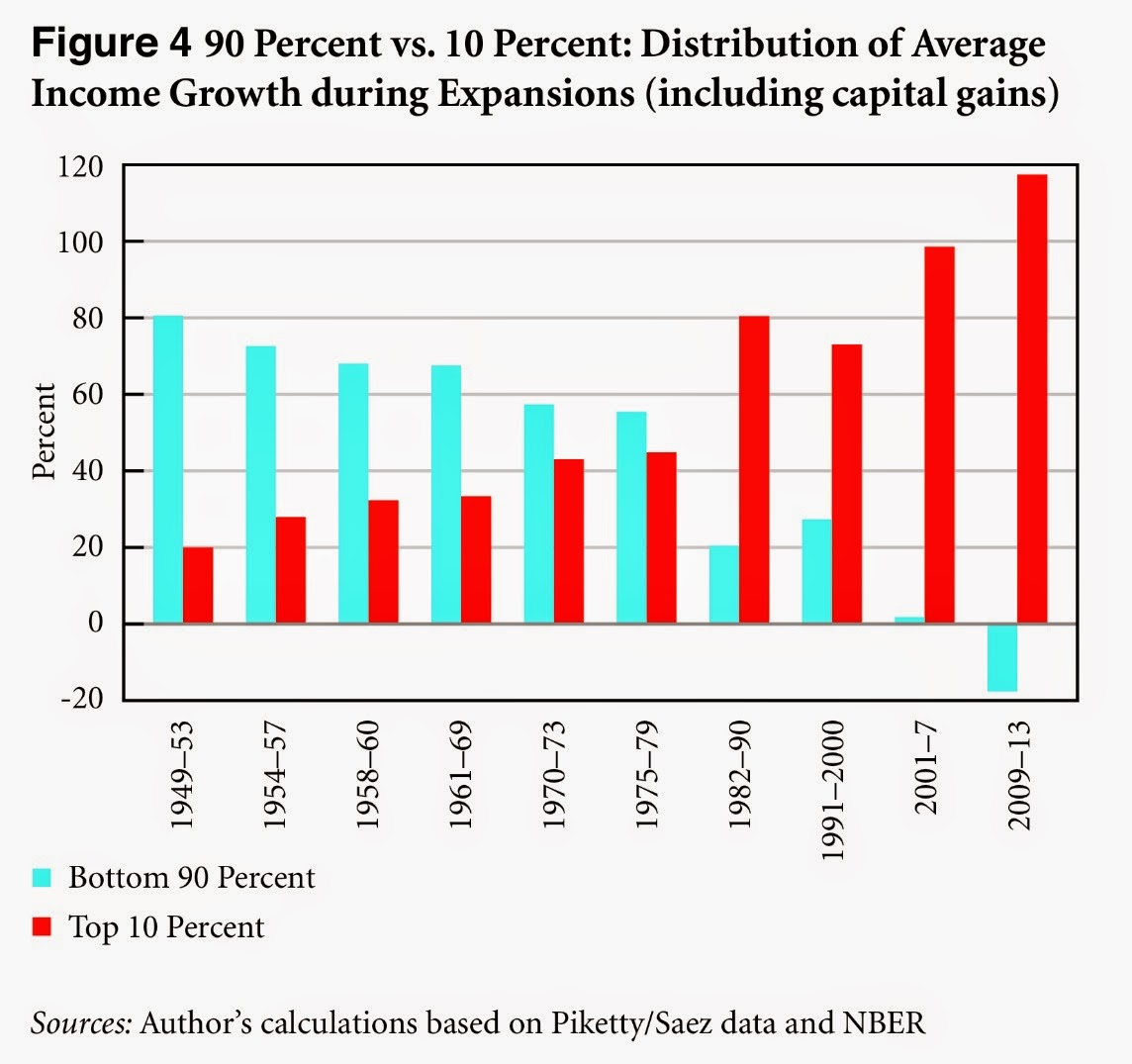 The problem with this graph, and its description, is that it purports to measure income growth during entire expansions.  But that's not quite true, since the current expansion did not end in 2013, but is ongoing.  Thus the measure of the relative income shares of the bottom 90% vs. top 10% in prior expansions is not directly comparable.

To be directly, comparable, Tcherneva should have measured relative income shares during the first 4 years of each expansion.  I should emphasize that, had she done so, the results would have been similar, using the Saez and Piketty tax return data, which can be found here,

Aside from technical  accuracy, I am highlighting this issue because a slightly deeper look can give us much more information.

To begin with, the Saez and Piketty numbers are based on "tax units," i.e., tax filings.  Thus it is very similar to, although not identical with, households.  Thus the data is subject to all of the same issues that we get into when we discuss median household income - e.g., distortions based on the tsunami of Boomer retirements, and the importance of the unemployment rate (since the unemployed are counted in households and tax units, but not for purposes of median or average wages.

The second is best summed up in this graph, from Doug Short, which shows the real median income of the bottom 90% from the Saez and Piketty data, for the entire last century: 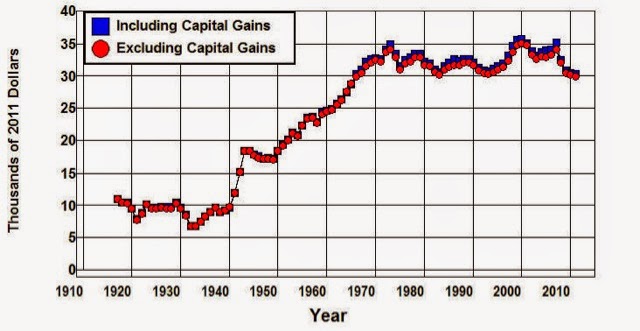 Note that income first peaked in the early 1970s, and has only exceeded that peak one time, briefly, during the tech boom of the late 1990s.  Of particular interest is how long it took in each economic recovery since 1980, and also the plateauing of income in the late 1980s.

Tcherneva herself posted a graph several months ago showing what happened with the comparative incomes of the bottom 90% and top 10% from income peak to income peak: Note that in the early 1980s, like the present, the average income of the bottom 90% actually fell -- just has it did in the present expansion through 2013.

In short, if we want to explain Tcherneva's data, both during the current economic expansion, and over the longer term, we really don't have to look further than three things

The other article this morning deals with wages, and comes from the Cleveland Fed via Barry Ritholtz.

The purpose of the study was to determine what has happened with real wages during this economic expansion - are they stagnant or have they fallen?  If so, why?
As the authors state, "This article answers the question: What fraction of recent changes in the average wage is due to changes in the occupation mix versus changes in wages within occupations?"  The answer is given in the below chart:

Interestingly, the authors find that, through 2013, the jobs added in the recession have NOT been, as commonly assumed, low wage jobs, but have actually skewed towards higher paying jobs.  They do find, however, that within occupations, real wages actually fell slightly.

My big problem with this article is in its explanation for the data. To begin with, it is not demographically normalized.  While it is always true that old fogies retire and young whippersnappers take their places at entry level incomes, this has disproportionately been the case as Millennials move into the labor force as Boomers retire.  This is likely to place some unusual downward pressure on wages.

But here is my real problem.  The authors conclude:

"Why did wages rise during the recession and fall during the recovery? It may be due to what are called “selection effects.” During recessions, firms tend to retain their most productive workers, both across and within occupations. ...
"It is also possible that wages declined more in the recovery than in the recession due to what economists call “sticky wages.” Reducing real wages is one of the ways the labor market adjusts to drops in demand for labor. ..."

You have got to be kidding me.

Wages rose during the recession because the price of gas fell was $3+ at the end of 2007 when it began and was under $2 a gallon when it ended.  Wages fell from there to 2013 because the price of gas went up to $3.95 a gallon during 2012 and 2013 (red, right scale in the graph below). This translated into actual deflation during the later stage of the recession, and 3%+ inflation during 2011 (blue, left scale), while nominal wage growth  slowly decelerated from 4% YoY to 1.5% YoY (green, left scale): 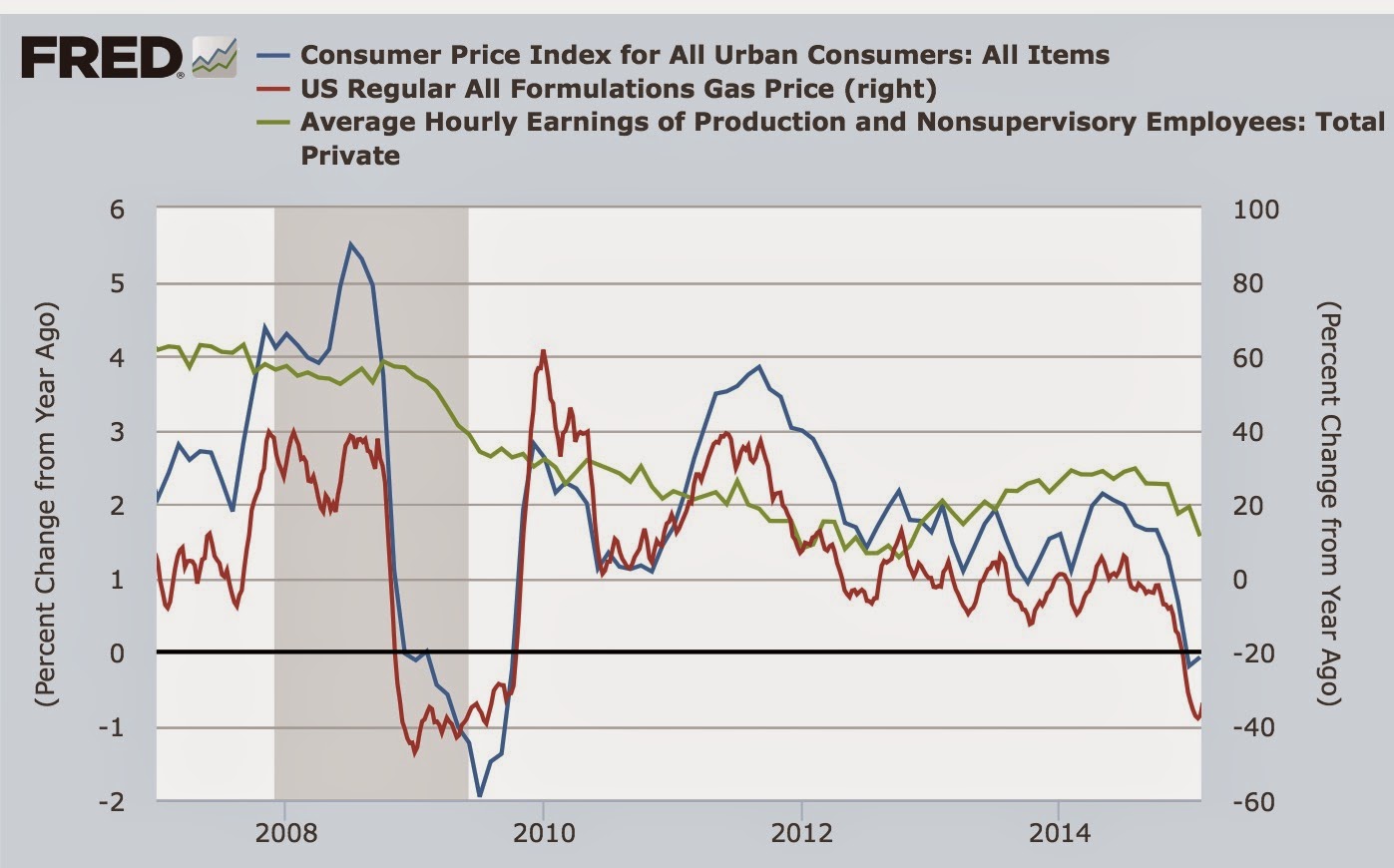 Let me emphasize that this is not an issue of nominal vs. real wages.  The authors state, "We adjust all wages to 2013 dollars to make it easier to compare values across time. For brevity, we call the 'real average hourly wage' simply the 'average wage.'

It continues to amaze me how the huge impact of the Oil Choke Collar has been almost completely overlooked.