US Equity Market Review For the Week of December 15-19: Searching For the Signal In the Noise

I think it's the secret desire of every technical analyst to always find order in the chaos.  We secretly believe that if we look long enough and hard enough at a series of charts, a clear pattern and future course of action will emerge.  There are times -- like the last couple of weeks -- where it has been damn hard to see what is happening.  For example, take this 30-day, 5-minute chart of the SPYs: 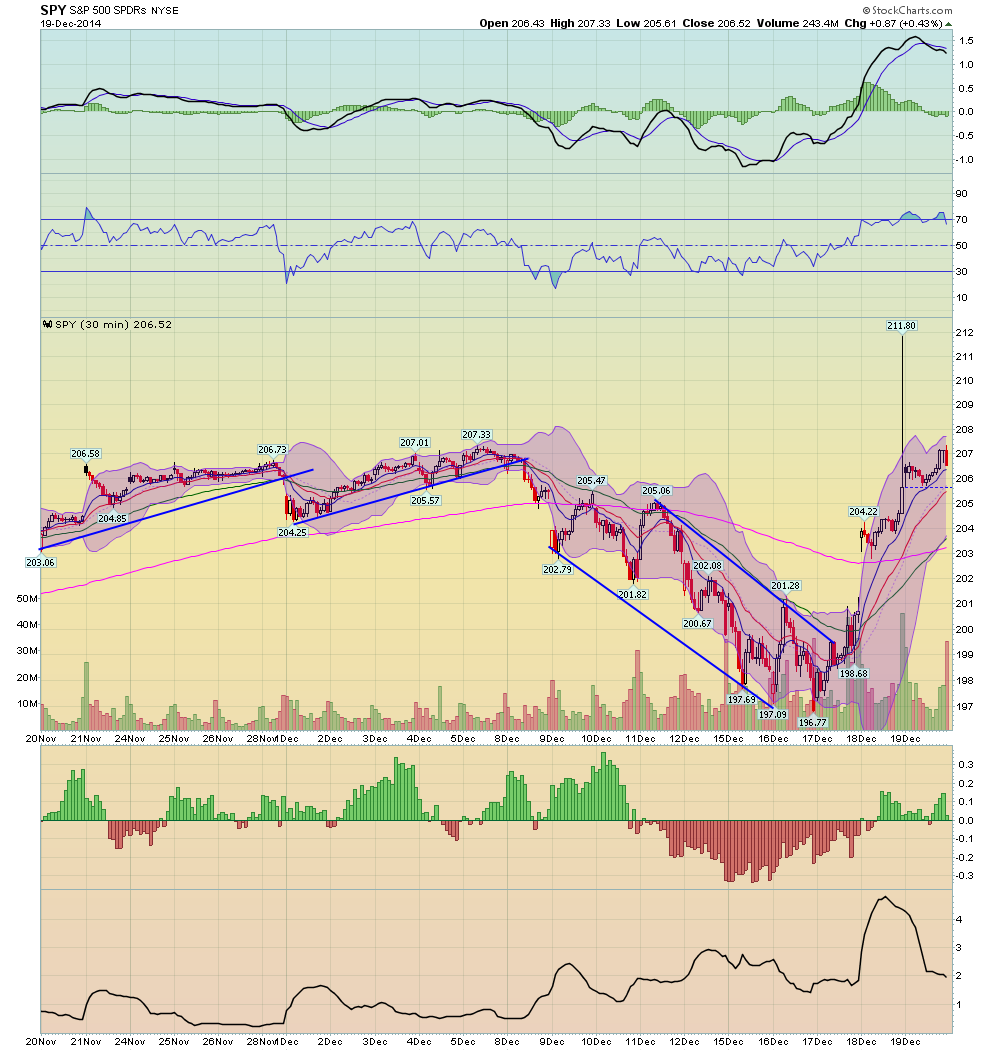 There are two week-long rallies with a slight upward angle -- one at the end of November and one at the beginning of December.  Both rallies hit resistance in the upper-206/lower207 area.  Then a downward sloping channel emerges with increased volatility and wider price swings.  Losses were consolidated at the beginning of last week until the Fed announcement when prices moved sharply higher.  But the chart really doesn't give us any meaningful and understandable overall pattern to discern.  Instead, it's a jumbled mess. 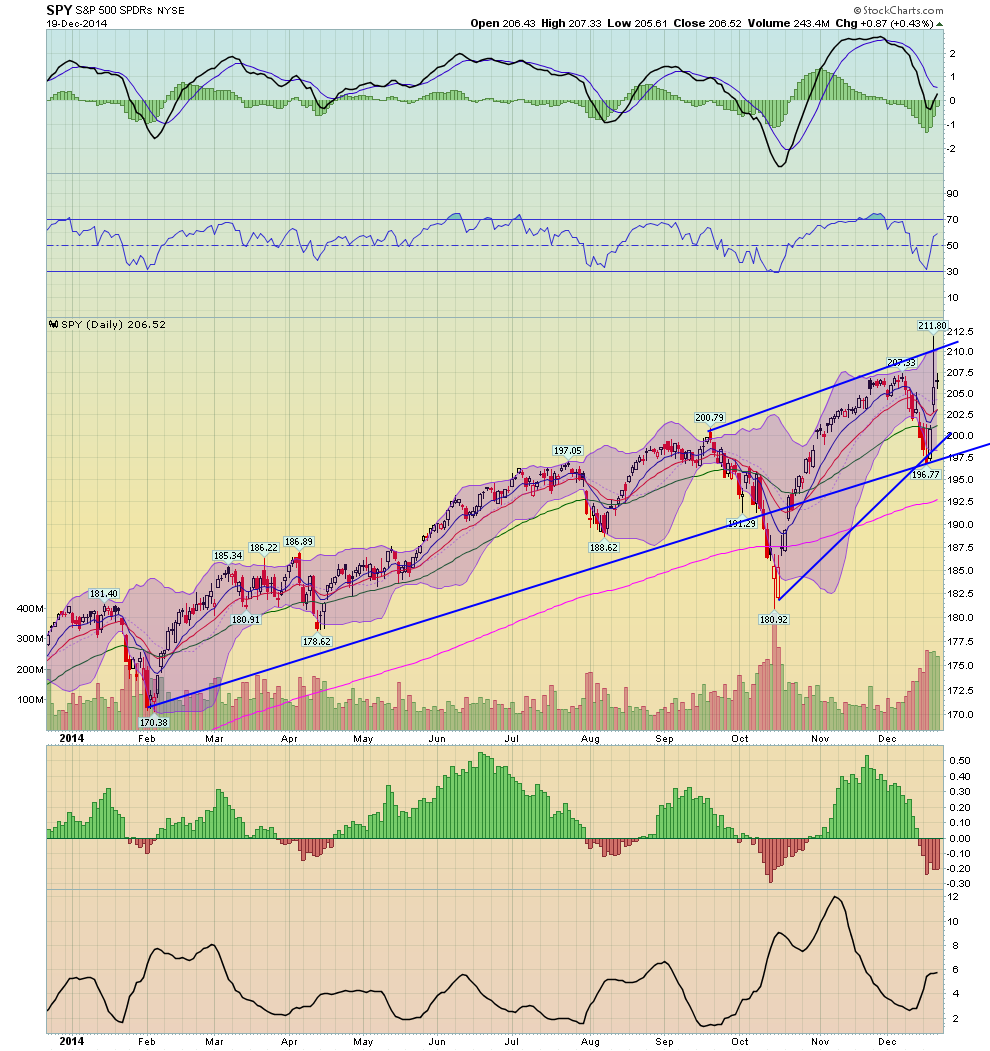 The daily SPY does still show an upward-sloping rally.  But there are two problems with this, with the first being the sell-off that clearly broke through the support lines connecting the early February and mid-December lows.  Martin Pring advises that a break doesn't change the trend if it is less than 2%-3%.  But that's not the case here where the move was over 6%.  And then there's the potential upward sloping wedge pattern forming, which is usually considered a topping pattern.  The trend break and the wedge give a strong indication that the market is indeed topping.
But, when we pull the lens back further to a far longer time frame, we're still in a rally: 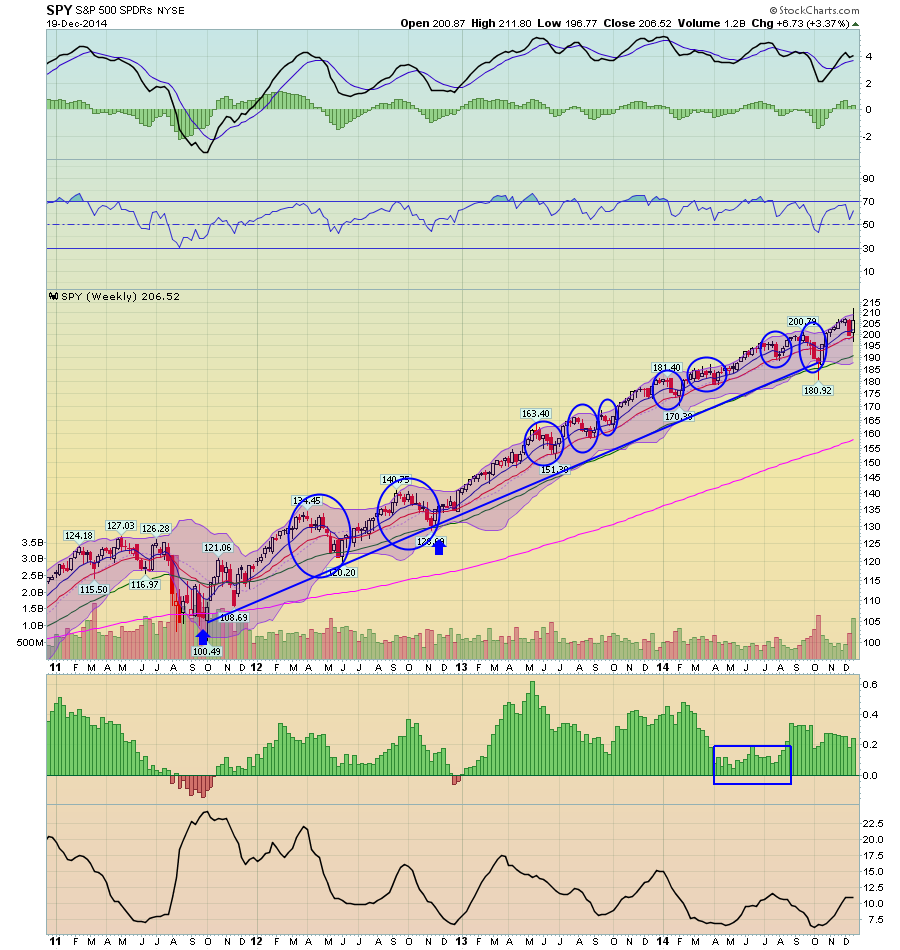 ﻿
Looking at the 4-year weekly chart, we're still clearly moving higher.  The price action that was so confusing above has been reduced to two bars, one red and one clear, indicating we had a brief sell-off followed by a rally.

And that analysis falls in line with the latest economic analysis from the Fed's latest policy statement:

Information received since the Federal Open Market Committee met in October suggests that economic activity is expanding at a moderate pace. Labor market conditions improved further, with solid job gains and a lower unemployment rate. On balance, a range of labor market indicators suggests that underutilization of labor resources continues to diminish. Household spending is rising moderately and business fixed investment is advancing, while the recovery in the housing sector remains slow. Inflation has continued to run below the Committee's longer-run objective, partly reflecting declines in energy prices. Market-based measures of inflation compensation have declined somewhat further; survey-based measures of longer-term inflation expectations have remained stable.

This is directly in line with the Conference Board's LEIs and CEIs:

“The increase in the LEI signals continued moderate growth through the winter season,” said Ken Goldstein, Economist at The Conference Board. “The biggest challenge has been, and remains, more income growth. However, with labor market conditions tightening, we are seeing the first signs of wage growth starting to pick up.”

“Widespread and persistent gains in the LEI point to strong underlying conditions in the U.S. economic expansion,” said Ataman Ozyildirim, Economist at The Conference Board. “The current situation, measured by the coincident economic index, has been improving steadily, with employment and industrial production making the largest contributions in November.”

And finally, consider this chart from Scott Grannis showing the relationship between corporate profits and GDP: 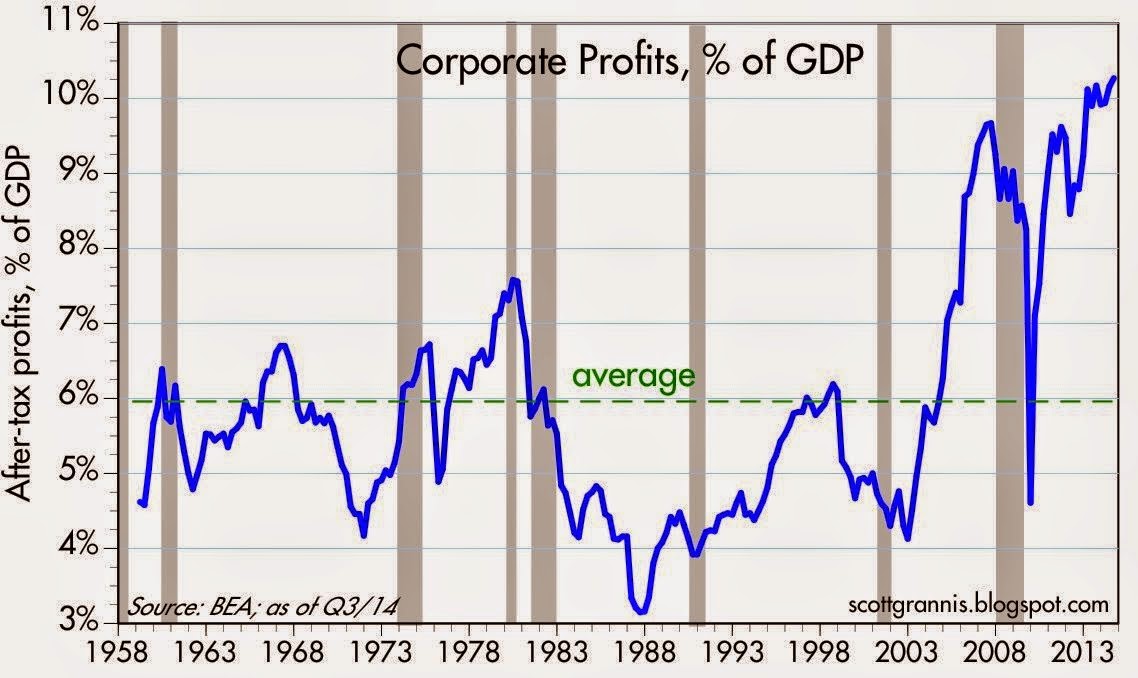 Earnings are the mother's milk of the stock market.  And right now, corporations are making a ton of money.

On the downside, the market is still expensive from a valuation perspective, so the upside is limited, barring further growth.  But given the underlying economic fundamentals there is no reason to think growth won't continue.  And that makes the last month of price action nothing more than statistical noise in the wider context of a growing economy.
Posted by Unknown at 7:40:00 AM