The state of the housing market, April 2014

As most readers know Bill McBride a/k/a Calculated Risk and I made a charitable bet about the direction of housing in 2014.

In his forecast for 2014 residential investment, CR said, "I expect growth for new home sales and housing starts in the 20% range in 2014 compared to 2013."  By contrast, half a year ago, in a post at XE.com, I said that "If the typical past pattern is followed, we will shortly see permits running 100,000 less than one year previously."

Courtesy of a horrible comparison number with April 2013, YoY housing starts were up over 20% in April 2014, and so I have made a charitable contribution to the scholarship established in the name of CR's late co-blogger, Tanta.

This morning the final monthly report on housing for April, pending home sales, was reported by the NAR.  The index was +0.4% m/m and remains down -9.2% YoY: 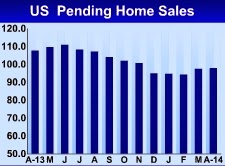 So, with the first four months of 2014 in the books, here is what the housing market looks like. 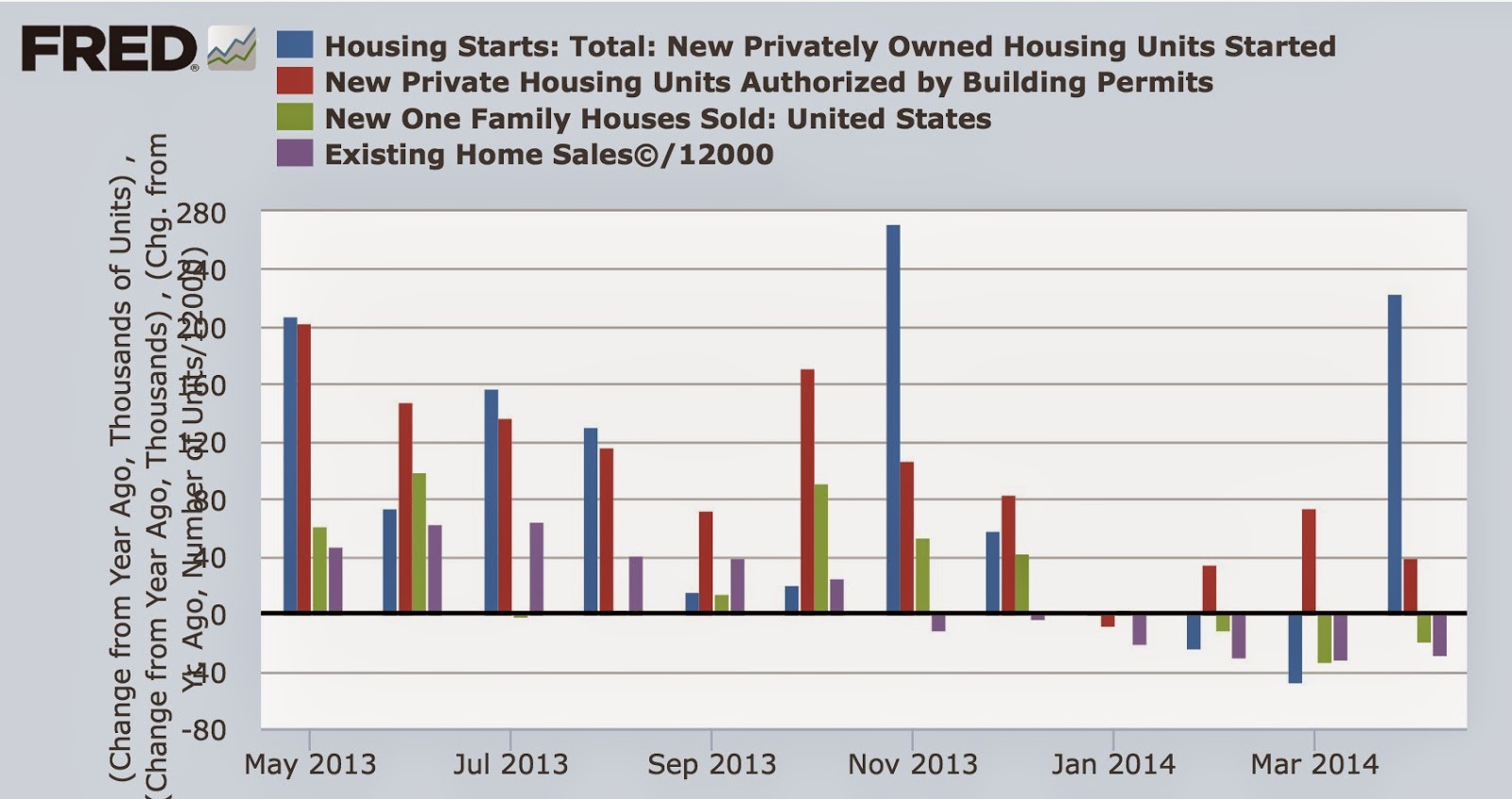 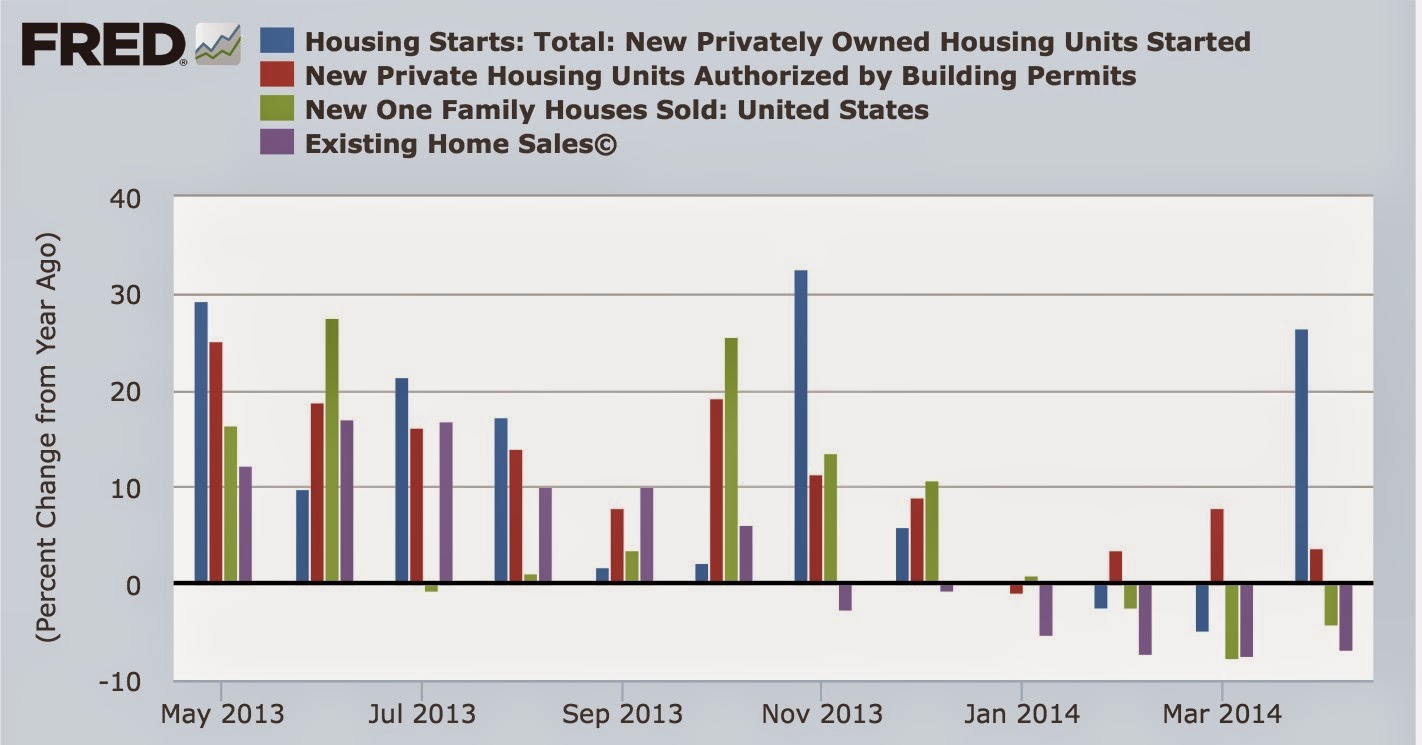 Both of these graphs show the clear deceleration in the housing market through 2013 and into 2014, with a definite surge in starts (making up for their poor showing vis-a-vis permits in the first few months of 2014).  Whether that was a one-month phenomenon or the beginning of a positive reversal is very much open to question.

Note that there have been extensive revisions to the 2013 data this month, resulting in several altered comparison high months.

But as I have written in the last several weeks, it is only multi-unit (apartment) construction that is carrying the recovery in housing this year. Single family home starts and sales have completely stalled.  Here is a graph of single family permits (blue) and starts (green) compared with 5 unit or higher permits (red) and starts (orange), all normed to 100 as of September 2012: 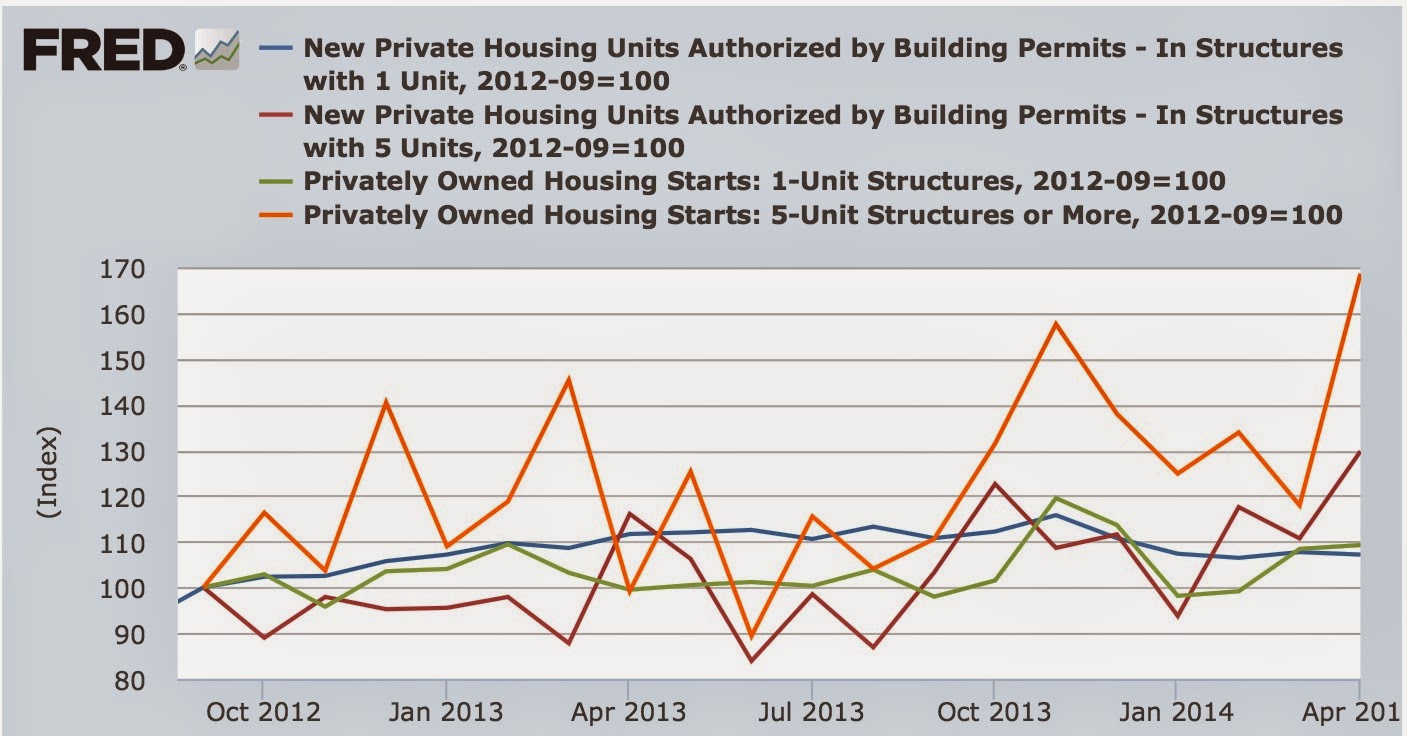 It is easy to see that it is multiunit construction, especially beginning in the second half of 2013, that is entirely responsible for any continuing increase in residential construction. Single family home construction and sales have gone nowhere since the beginning of 2013.

With mortgage rates at 7 month lows, and with interest rates likely to be lower YoY in several months, there will probably be renewed vigor in the market by the end of this year.  Still, with one-third of 2014 in the books, the odds that the housing market as a whole will be up as much as 20% for the year look like slim and none.  Due to the demographic tailwind of the Millennial (a/k/a "echo boom") generation, and the boom in apartment construction, it also looks unlikely that permits will fall -100,000 as I originally forecast.