One of the themes of economic data this year is that the expansion is mature.  I'm not expecting to get materially better than it has been for the last several years, and while I see continued expansion throughout this year, I am on the lookout for signs of longer term deterioration.

Which brings me first of all to March vehicle sales.  The good news is, these made a new post-recession high of 16.4 million annualized.  Here's Bill McBride's graph: 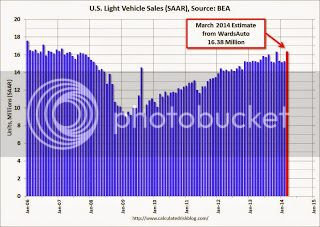 New vehicle sales have in the past peaked at least half a year before any economic downturn.  So the new high is yet more evidence that the expansion will continue through this year.

But even taking March into account, first quarter 2014 vehicle sales were essentially equal to fourth quarter 2013 sales.  So if there was pent-up demand because of the hard winter, there was no evidence of an increase of demand in the last 6 months.

Even this isn't really bad.  Vehicle sales can plateau for a long time during an expansion without materially declining.  It simply emphasizes the point that this looks like a mature expansion.

Which brings me secondly to an update of my comparison of PCE's and real retail sales.  In all cases since World War 2, in the earlier part of an expansion the YoY% increase in real retail sales exceeded that of PCE's.  In the latter part, the reverse is true.  Since PCE's include more spending on necessities compared with retail sales, it makes sense.  People cut down more on discretionary spending first, before they cut back on necessities.

Here, the news is that for the second month in a row in March YoY PCE's have now exceeded YoY real retail sales: 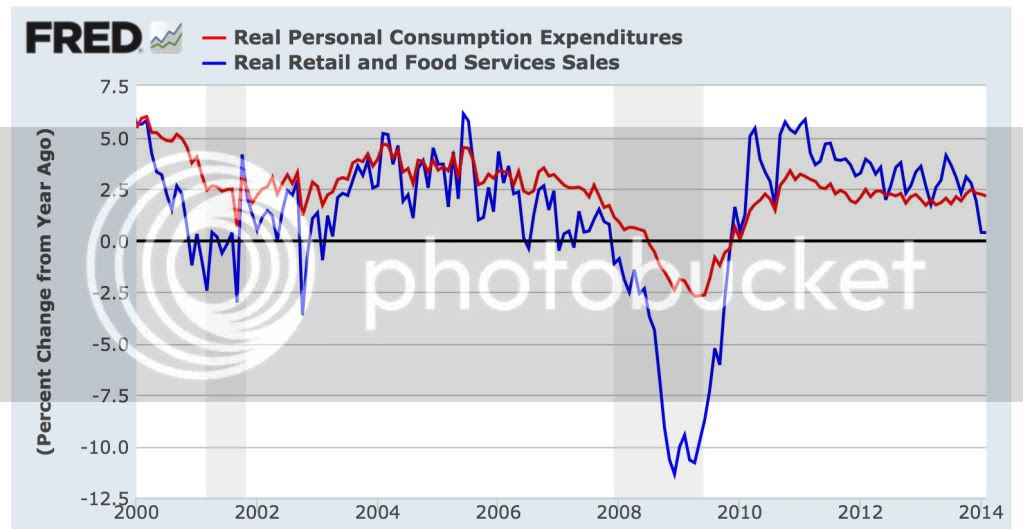 This is absolutely not a sign of DOOOOM!!!  But it is the kind of thing I expect to see late in an expansion.

This month as usual I will pay a lot of attention to housing reports. And first quarter earnings will start to be reported, and the reports I have read so far are forecasting relative weakness in this long leading indicator.  We'll see.